LEGO Dimensions is a Toys-to-Life video game based on many LEGO toy lines, including The Simpsons that was released on September 27, 2015.

A "Level Pack", and two "Fun Packs" have been made for the TV Series.

In the story mode, we see The Simpsons be spotlighted in the second level in the game, called "Meltdown at Sector 7-G. In this level, we see Lord Business from The LEGO Movie and The Joker from DC Comics invade Springfield. In the rest of the game, Homer will occasionally be summoned, much to his terror.

The level pack serves is a LEGO adaptation of The Mysterious Voyage of Homer. Though some of the elements are either condensed, expanded upon to be made more game-play friendly or removed to make the game more suitable for children (for example any reference to alcohol is removed).

The Simpsons has its own Hub. This features many of the locations from the show (with Moe's Tavern and the First Church of Springfield being the most noticeable omissions). This hub features sidequests given out by Hans Moleman, Groundskeeper Willie, Mayor Quimby and Grampa. 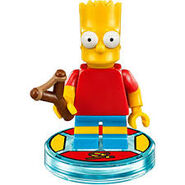 Springfield as it appears in LEGO Dimensions.

Read more about this game on Brickpedia, the LEGO Wiki