This article is about the guest star. For the character, see Lady Gaga (character).

Lady Gaga (born Stefani Joanne Angelina Germanotta in New York City on March 28, 1986) is an American pop singer, songwriter and actress. On The Simpsons, she guest-starred as herself in the Season 23 finale episode "Lisa Goes Gaga".[1] Before that, she made two non-speaking cameos in the Season 22 episode "Angry Dad: The Movie". 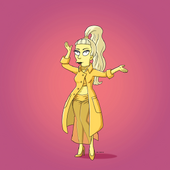 Promotional image for her character.

At the recording session.

Lady Gaga and her meat dress.