This article is about the character. If you’re looking for the guest star, see Lady Gaga

Lady Gaga is an American singer well known for her eccentricity and odd costumes.

Laga Gaga first appeared on the show when she accompanied Elton John, walking on the Red Carpet and in a dinner of Golden Globe Awards.[1]

She was then mentioned by Manjula, who reveals that she is jealous of her because Apu pays more attention to the singer.[2]

She was also parodied as Lady Pumas.[3]

She made her first major appearance on the show when she arrived in Springfield while on her way to a concert; at that point, she is depicted as having psychic visions.

One of these visions prompts her to stop by at Springfield when she realizes the town's civilians have low self-esteem. Gaga sings Monster to cheer everyone up, and the song reaches to everyone except a heavily-depressed Lisa.

In an attempt to cheer Marge up, Gaga starts making out with her. Afterward, Gaga takes it upon herself to cheer Lisa up, but her attempts fail. Finally, Lisa becomes fed up with Gaga and yells at her, cheering herself up in the process as she is finally able to unleash her rage, which she has bottled up prior to the outburst.

Gaga leaves in tears, but Lisa realizes how happy she feels and catches up with the singer, apologizing. The two perform a duet called Super Star together.[4]

Songs in The Simpsons

Lady Gaga and Elton John in the Red Carpet of the Golden Globe Awards.

Lady Gaga, Elton John and Ricky Gervais in the dinner of the Golden Globe Awards.

Lady Gaga during her first concert in Springfield. 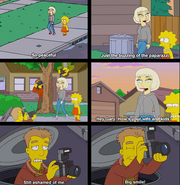 Lady Gaga talk with Lisa while paparazzi take photos of them. 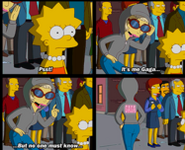 Lady Gaga with her penguin.

Lady Gaga at the airport.