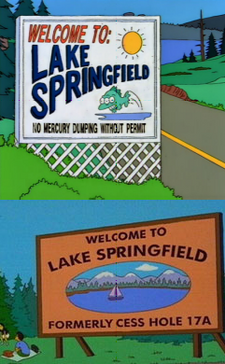 Lake Springfield is a lake in Springfield. It is highly polluted, and as such has spawned mutated fish.

The lake contains rapids and rocks. It also has a waterfall on one end.[1]

Homer once took his family and the Flanders Family on a trip to the lake.[2] According to Lisa, the lake once caught on fire.[3]

The lake was a huge source of pollution, being the dumping site for waste from the nuclear power plant, and eventually, the entire town. The polluted lake claimed the lives of at least one rock band. An effort to clean up the lake by Lisa and Colin succeeded, and a shoulder-height concrete barrier was constructed by Mayor Quimby to prevent any "idiot" from dumping into the lake. However, the wall didn't stop Homer, who repolluted the lake with his and his pet pig's waste, causing some animal life and the entire lake to mutate, and forcing the Environmental Protection Agency to intervene by trapping Springfield inside a giant glass dome, however, it did prevent Cletus Spuckler from dropping his waste in the lake.[4]

The waterfall
Add a photo to this gallery

Retrieved from "https://simpsons.fandom.com/wiki/Lake_Springfield?oldid=713494"
Community content is available under CC-BY-SA unless otherwise noted.