Lard Lad is an advertising mascot used to promote Lard Lad Donuts. He stands on top or next to the donut shops.

Lard Lad appears in the new Opening Sequence, after the head of Jebediah Springfield's statue lands on Ralph Wiggum. As the camera zooms past Ralph, Lard Lad appears on the left side of the screen and the Billboard gag on the right side.

In a call-back to the above Treehouse of Horror, Kang & Kodos bring him to life using the laser from their space ship. At that point, Homer and Bart rush into the area where he is wreaking havoc. Bartman either opens his hatches using his slingshot and then flies down onto the hatch, or HeliumHomerball uses gummy bears to open the hatch and then hovers onto the hatch. The whole battle was watched and reported on by Kent Brockman. After all of his wires had been disabled, he fell to the ground and Homer kicked his 'Lard Crotch'.[2]

Lard Lad appears in The Simpsons Spin off Game Lego Dimensions. Lard Lad is seen standing by Lard Lad's Donuts as Lord Business's Micro Managers attack Springfield. Groundskeeper Willie and Joe Quimby Are seen running past him. Lard Lad later appears as minikit Event in The Simpsons world after getting all the Minikits in Meltdown at Sector 7-G.

The Lard Lad statue after the rebranding. 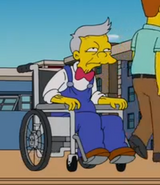