Lard Lad Donuts is a donut shop in the town of Springfield, The store's mascot, Lard Lad, stands in the parking lot of the building holding a giant donut.

The store is a part of the Fast-Food Boulevard that seems to be famous in policemen terms, as Chief Wiggum is often seen eating some. It is generally an estimated three-meter tall donut store with an estimated eight-meter tall mascot of a young boy proudly holding a donut.

In one comic, he had to find missing holes from donuts for a Lard Lad donut store. In level 7 of The Simpsons: Hit and Run, he is seen with green eyes. In The Simpsons Game, he is a boss. Lard Lad Donuts is shut down by a health inspector before giving away free donuts in The Simpsons Movie, and the Lard Lad is painted in different colours and seen later in the movie during the dome sequence. The former was disproved in "E. Pluribus Wiggum" when an explosion blows Lard Lad's head off.

As part of the government's pledge to purge Springfield of pollution and clean the lake, Lard Lad Donuts' was also shut down by the health inspector thanks to a rat infestation (rats are seen in the background stealing donuts). The store hosted a free donut extravaganza. Unfortunately, this distracts Homer Simpson, who decided to dump a large silo full of pig feces into Lake Springfield instead of having to wait for a long line at a waste disposal facility. This ultimately leads to a Trappuccino.[1]

Sometime after Trappuccino, the Fast-Food Boulevard was destroyed by a gas explosion, including the store.[2]

In the "Treehouse of Horror VI" segment "Attack of the 50 Foot Eyesores", Homer steals the giant donut from the Lard Lad statue, which comes to life by mysterious circumstances.

A similar occurrence happened in "Treehouse of Horror XXIV", in the opening sequence a bolt of lightning struck the Lard Lad statue and he crushed two cars but was subsequently eaten by a giant cyclops resembling Chief Wiggum.

In The Simpsons Game, the statue is brought to life by Kang and Kodos and Bart and Homer have to destroy it.

In Lego Dimensions Lard Lad Donut's are seen when the Micro Managers invade Springfield Lard Lad can be seen standing on the Side. In the Hub Lard Lad appears as a mini kit event. A Quest can be done in the Hub world by Hans Moleman who has to search for 30/25 donuts scattered around Springfield but can't leave the shop unintended once the Player brings back the 30/25 Donuts Moleman rewards the Player with a Gold Brick. On top of that Comic Book Guy can be seen inside the Shop and Chief Wiggum is seen walking around it and inside on the PS4. 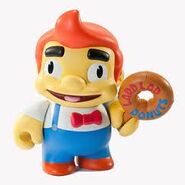 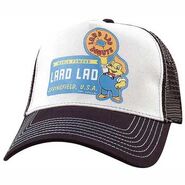 A trucker cap- now all you need is a semi!

As seen in Hit & Run

The Lard Lad statue in "The Seemingly Never-Ending Story".