New Kid on the Block

Laura Powers is a tomboyish teenage girl who lived next door to the Simpsons. She is the only child of single-parent divorcée Ruth Powers. She is understood to be the first crush of Bart Simpson. Her jacket has a corporal insignia on it. Since she no longer lives at home, she is probably around 18 years old.

Laura and her mother Ruth Powers moved into the house next door when the Winfields moved out. Marge Simpson and Ruth Powers became fast friends; so did Laura and Bart Simpson. After Laura made Bart faint, Bart developed a crush on her, but later had his heart broken when he found out that she and Jimbo Jones were in a relationship. After Bart prank called Moe's Tavern, Laura chose that Jimbo was no good for her and said that she would date Bart if he were a little older: "If you had a bad teenage mustache, I'd go out with you in a second." She then kissed Bart. Since the events of "New Kid on the Block", Bart and Laura have not been in contact again.

Laura appears to be no longer living with her mother, but she's still in Springfield. According to "The Strong Arms of the Ma"[1], Marge exclaims her surprise when she sees Ruth Powers again at Springfield's muscle beach, calling Ruth an old neighbor, implying they had moved out sometime after "New Kid on the Block". Near the end of the Trappuccino incident, she throws rocks at Homer when he returns to Springfield, and raggedly appears in the crowd alongside her mother upon the climax of the dome's destruction.[2]

Laura has a tomboyish, laid-back and quick witted charming personality. While outgoing and upbeat, she also displays a great deal of etiquette and manners, from which she owes to a strict and rigorous childhood.

Her interests include rebellious quasi-thugs, poking dead bodies with a stick, and messing with peoples's minds. Her favorite restaurant is "Two Guys from Kabul." However, she dislikes authority and disco. Some of her extracurricular activities include babysitting, telling fortunes, and dance instructing.[3] 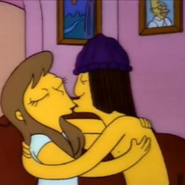 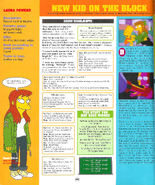