“Shut up-a your face!”
―Legs telling someone to be quiet

“I'm gonna whack ya in the labonza!”
―Legs, when threatening to beat someone up

“We brought someone to spring ya.”
―Legs

Max Legman, better known as Legs, is a member of the Springfield Mafia. He accompanies his old boss, Fat Tony, his current boss, Fit-Fat Tony, Louie, and, at times, Johnny Tightlips. Legs is the muscle, as are Louie and Johnny. Fat Tony is his boss, and then later, Fit-Fat Tony became his new boss, and he always listens to both of them, doing whatever told, including eating people and/or shooting at them.

Legs is an experienced mob doctor as shown when he sews Homer Simpson's thumb back on after Marge Simpson accidentally cut it off.[2] If you're not counting times where he does speak, (Which is rarely) he's the most quiet of the mafia.

Legs seems to be the tallest and skinniest member of the mafia so far. He has a brown slicked back haircut and somewhat large ears. In Seasons 3-13, his business suit and pants were charcoal grayish dark blue at first, then starting in Season 14, their color officially changed to a charcoal grayish dark green coloration. He also wears a black shirt, a light purple necktie, and black pointy shoes. In "The Blunder Years," he is shown to have black or blackish-brown hair. He has bad posture and hunches over in the modern episodes. He also said that his suit was made of flocked velvet in the comics.[3]

As stated before, Legs is usually quiet, so not much is known about him. Although he does seem smart enough to graduate from medical school, and he still seems to fall for incidents that other characters plan.[4] Legs also seems to have a close relationship with both his bosses.[5] He, along with Johnny and Joey the Arsonist, seemed to be quite argumentative with Dan Gillick when he became temporary don.[6] He sometimes works as the straight-man to Louie.[7]

He and Frankie the Squealer seem to be on (At least) good terms.[8] Legs also seems to be a very good listener with Fat Tony/Fit Fat Tony and Louie, and can also be pretty observant on details.

In his debut in "Bart the Murderer," he and Louie brought Bart Simpson to the Legitimate Businessman's Social Club to Fat Tony. Soon enough, Bart becomes a bartender for them. Legs, the rest of the goons, and even Bart were eventually arrested for the suspected murder of Seymour Skinner. They all played against Bart in court, until Skinner barged into the courtroom, revealing himself to be alive the whole time, thus ending the trial and releasing Bart and the mafia from prison.

Legs then appeared in "Homie the Clown," where Fat Tony, Louie, and him went to Krusty, demanding the money he owes them in a bet. The latter easily escaped them, by saying he had to go to the bathroom, and then leaving out the window. Legs seemed to fall for this at first when he said "When he's done in there, I gotta go.". Later in the episode, Legs tried to shoot Homer, (Who is dressed as Krusty, making Fat Tony, Legs, and Louie think he is Krusty) but only bought three bullets, resulting Fat Tony to shame him for this when he ran out, and they resort to just kidnapping Homer. Legs then mentions that he has a sister, when he asks in suspicion and anger to the Krusty-dressed Homer that if Homer is the same Barney Gumble who keeps taking pictures of her before, implying that he hates Barney for that. (And the reason Legs asked Homer that is because Homer, wanting to escape the mafia, claimed that he is Barney and not Krusty) It is even somewhat implied that Legs might have a visual impairment; When he claims to see four Krusties instead of two. (With both Krusty and the Krusty-dressed Homer in front of him)

In "Mayored to the Mob," Legs told Homer that Joseph Kennedy, father of former President John Kennedy, had something to do with Legs acquiring his nickname when Homer asked him how he got that said nickname, though it was never properly explained when he was interrupted by Homer finding a cannoli.

In "Moe Baby Blues," he, along with Fat Tony's gang, the Castellaneta Family, and President of the Italian-American Anti-Defamation League, almost unknowingly got Maggie Simpson killed in an attempted "Italian-American-Mexican Standoff" at Luigi's. But thankfully, that tragedy didn't happen when Moe Szyslak arrived and saved her by pointing out how her innocence changed his life before, making Legs cry with Fat Tony's gang, the Castellaneta Family, and President upon being touched by it, as shown even more when he tearfully hugged Fat Tony, who tearfully hugs back in comfort, and then collapsed on the floor to bury his face in his arms to cry in.

In "The Seven-Beer Snitch," he, along with the mafia and other prisoners in the Springfield Penitentiary, tried to kill Homer out of revenge for Homer continuing to rat them out. He, Frankie, and Johnny also got into a discussion about the mafia’s lexicon at one point in that episode.

In "Penny-Wiseguys", he was fairly aggressive to Dan when he become the temporary don until Fit-Fat Tony is done with his temporary jury duty. Legs then gets his comeuppance later on when Dan almost stabs his hand. Then Legs, along with Frankie, are about to be shot by Dan at Luigi's, but Dan is stopped by Homer. (But Dan, ironically, happened to ask Homer to stop him from doing so already)

In his cameo appearance in "Diary Queen," when Louie asked Fit-Fat Tony if he, Legs, and Johnny can kill Bart and Milhouse Van Houten upon spotting them seeing them dump Frankie's body into the river, Fit-Fat Tony told them no because they don't kill nosy children unless they are 18 years old or over.

In "A Made Maggie," Legs noticed how soft Fit-Fat Tony has become to Maggie, as well as attached to her and her family instead of the mafia, ever since Fit-Fat Tony became Maggie's godfather. Legs was also annoyed with Louie by the fact that Fit-Fat Tony wanted them to babysit Maggie. However, Legs got Maggie back both her pacifier and sandbox shovel from some bullying babies at the playground by dunking an empty sandbox bucket onto one of the baby bullies' head, and even helped dispose of Maggie's old diaper under Fit-Fat Tony's request, with Louie tying it to a brick-like anchor, dropping it into a ditch they dug, and then Legs himself shooting the said diaper. Even earlier, Johnny bribed Legs and Louie into assisting him and Don Castellaneta on his attempted second betrayal to Fit-Fat Tony. However, Legs instead assisted Louie in saving Fit-Fat Tony from Johnny's attempted second betrayal at the "Itchy and Scratchy's Christmas on Ice" showing by restraining Johnny, and allowing Fit-Fat Tony to punish him for his attempted betrayal, right in front of the Simpsons even. This resulted in Fit-Fat Tony and the Simpsons to agree on Fit-Fat Tony stepping down as Maggie's godfather in the end, like how Marge wanted. At the end of the episode, Legs and Louie are disposing one of Maggie's diapers again. Legs gets fed up with this task, claiming that he's going to call HR, (Harry the Rat) if he has to keep doing this, resulting Louie to then tell him that Harry is buried right next to them. Legs then continues to dispose, now in shock.

In "A Serious Flanders: Part One", he and the rest of Fit-Fat Tony's gang tried to threaten Kostas Becker to leave Springfield at Krusty Burger, but Kostas attacks them, jamming a salt shaker into Legs' eye in the process. Legs manages to survive this at first, but then gets shot in the other eye by Kostas, eventually killing him alongside the murdered Mr. Burns, Fit-Fat Tony, Louie, Johnny, and Disco Stu.

Legs was originally about to be in The Simpsons: Hit & Run, yet was scrapped. His voice files could be found on Youtube: https://youtu.be/2MY8OFTIoNU

In the mobile game The Simpsons: Tapped Out, Legs, along with Louie and Fat Tony, take Bart as a bartender again. Once, he mentions that he has a masters in Fiscal Studies; Which he also went to night school for apparently. He also mentions that he has 172 Swiss army knives, and he can’t pay his rent because of that.

Legs also appears in the comic Simpsons Super Spectacular No. 11 in the issue "I'm Rubber, You're Glue" as Mega Legs. He was defeated by GlueStick. (Ralph Wiggum's superhero form and name)

Legs also has a son named Calves who is part of Michael D'Amico's junior mafia, alongside Louie's son, Louie Jr., in the comics.

In the Season 18 DVD, it shows Legs and Selma Bouvier (While in her outfit from "The Real Housewives of Fat Tony") hooking up. In the DVD menus, it shows him playing poker with Homer, Fat Tony, and Don Vittorio DiMaggio, before being released by the police.

In the book Chief Wiggum's Book of Crime and Punishment, Legs is classified as the "Hired Goon" in the segment "The 45 Types of Alleged Perpetrators You Meet on Your Beat". And the police records on the Springfield Mafia, describe Legs as a "Gangster/Criminal/Suspicious" type of mobster.

Fans often get Legs and Louie confused because neither character has been very developed and because they are almost always seen together. Legs has a short brown haircut and raspy voice. Louie has a black slightly afro hairstyle and a more high-pitched squeaky voice.

Even Legs, in some episodes, has his raspy voice changing from deep raspy to rough raspy in some episodes when he is voiced by Harry Shearer. And when Karl Wiedergott temporally voiced him in "Chief of Hearts," he has his rough raspy voice. However, when Hank Azaria formally voiced him, he sounded almost like Johnny with his Jersey accent (In “Bart the Murderer”) and then had a rough raspy Jersey accented voice. (In “Homie the Clown”) In his, Fat Tony, and Louie's cameo in “The Canine Mutiny,” he spoke in Louie's voice by Dan Castellaneta instead of Shearer, which is considered a huge goof in that episode.

(Note: If you're on mobile and can't see the titles, please go onto the wiki-Simpsons article)

Legs in "The Real Housewives of Fat Tony"

Legs in "Chief of Hearts" 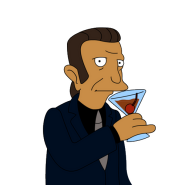 Legs in "Bart the Murderer"

Legs: The kid liked to wet his beak in anything.

Legs with Fat Tony, Louie, and Don Vittorio DiMaggio in "Homie the Clown"

Fat Tony: I told you we should've bought more than three bullets!

Legs: The same Barney Gumble who keeps taking pictures of my sister?!

Legs (With his hand in the left edge of the image with Fat Tony's back) crying with Fat Tony, Louie, and Johnny Tightlips by Maggie's innocence touching them

Legs starting to cry with Fat Tony, Louie, and Johnny Tightlips by Maggie’s innocence touching them

Legs crying with Fat Tony, Louie, Johnny Tightlips, the Castellaneta Family, and President of the Italian-American Anti-Defamation League by Maggie’s innocence touching them

Legs crying with Fat Tony, Louie, Johnny Tightlips, the Castellaneta Family, and President of the Italian-American Anti-Defamation League by Maggie’s innocence touching them 2

Legs: Whaddya doing? I talk with that hand...

Dan: Well, you're gonna lose it if you keep on charging your manicures to us! 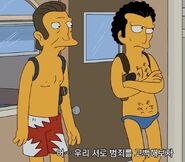 Legs and Louie in their swimming shorts

Legs and Louie in "Whistler's Father"

Legs with Louie and Fit-Fat Tony

Legs with no pupils

Legs in the movie

Legs in the aftermath of a barfight