Legs is a member of the Springfield mafia. He accompanies Fat Tony and Louie.

Legs is the muscle, as are Louie and Johnny Tightlips. Fat Tony is his boss and he always listens to him, doing whatever told -- including eating people or shooting at them.

Legs is an experienced mob doctor as he sews Homer's thumb back on after Marge cut it off by accident [1]. Legs mentions that he has a sister, and says that Barney takes pictures of her, and it is implied that he hates Barney for that.[2].

Fans often get Legs and Louie confused because neither character has been very developed and because they are almost always seen together. Legs has a short haircut and raspy voice. Louie has a slight Afro and a more high-pitched, even squeaky tone. He says that tear gas is "[his] one weakness," though this is likely an embellishment. 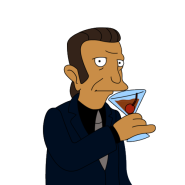 Legs and Louie in Whistler's Father

Legs with Louie and Fat Tony

Legs in the movie.
Add a photo to this gallery

Retrieved from "https://simpsons.fandom.com/wiki/Legs?oldid=816760"
Community content is available under CC-BY-SA unless otherwise noted.