He has shaggy eyebrows and a beard. He wears a green coatee (short jacket) and a bowler hat with a four-leaf clover in the hatband. He also wears short green trousers, light/dark-green banded stockings, and dark green shoes with gold buckles. He always carries a white clay tobacco pipe in his teeth to complete the stereotype.

He is seen as Ralph's imaginary friend who tells him to burn things.[1] He is also seen during Gil, Kirk Van Houten, and the Crazy Cat Lady's St. Patrick's Day Song.[2] He was also seen in the parade,[3] he attacks Homer and Bart,[4] and the well in where he is featured alongside his orange (Northern Irish) doppelgänger.[5]

When the town was divided over whether or not the Simpsons should share the money from a painting they bought from the Van Houtens, he was for them to keep the money to themselves.[6]

The Leprechaun married the Gypsy. Yoda performed the ceremony.[7]

The Leprechaun allied with Sideshow Bob, Kang, and the ghost of Frank Grimes in an attempt at killing the Simpson family in revenge at a Christmas tree lot (being the fourth member that was alluded to). However, he insisted on them dancing before commencing the revenge, which ultimately resulted in Maggie Simpson killing them via beheading them, with only Frank Grimes "surviving" due to the fact of already being deceased.[8] 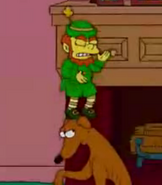 Leprechaun dancing in the Simpson's house during St. Patrick's Day