The Simpsons are invited to Milhouse's birthday party, which is shown to be a big expensive party, so much that Kirk had to sell the house in order to pay for it. When Marge and Homer thinks that all birthdays are getting too expensive, Homer took drastic measures; by ruining other kids big birthdays. However the party commitment discover Homer's deeds and at first put a black mark on the Simpsons, preventing Bart, Lisa, and Maggie to ever have another birthday but Homer was given a deal to make sure the kids can have birthday again; Homer must give Rod a magical birthday party or else the black mark will remain (That and Bart threaten to bang pots and pans on Saturday morning, preventing Homer from sleeping in late.). At Rod's party, Grandpa meets his old army friends, but Homer would not let him talk to them, as he is now old and useless. The army soldiers decide to teach Homer a lesson. They force them to make amends with Grandpa, so Homer takes Grandpa to the cinema, but Homer is disgruntled that Grandpa spent a lot of time in the bathroom. They eventually make amends after the soldiers force Homer to hug Abraham and admit his love at gunpoint.

Meanwhile, Bart meets Milhouse's Dutch cousin, Annika Van Houten, and starts to have a crush on her. When Annika tells Bart to get her some more E-cigarettes, Bart also gets a pair for himself to smoke. Yet, Marge catches Bart smoking an E-cigarette, but Bart tries to remind her it is legal in this state, Marge takes it up to Homer, who again says it legal. When Bart says that they are sending Annika home back to Holland, Grandpa tells him a story about when he was a planesman, he stole a plane and flew it up to space, and broke the sound barrier, while also destroying the plane, just to impress a girl called Sunny, who turns to be Mona Simpson. Grandpa says to Bart that he needs to make a grand gesture to Annika. Bart races to the airport and just narrowly manages to get to Annika. Bart then says that he never liked Annika, since all she did was complain about stuff. Then Bart dumps his backpack filled with cigarettes at her, to which a large crowd of people take them all. Annika furiously curses in Dutch about her being rejected and leaves. When Milhouse says that Bart he can go out with more of his cousins, Bart says he will now steer clear of the Van Houtens for a while, but Milhouse says he won't, as he thinks marrying a cousin will improve links to his family.

As an epilogue, Homer makes Grandpa a steak, but when Grandpa complains about it, Homer turns it into a vapor for an E-cigarette. Grandpa tests it, and says it is the best steak he has ever breathed. 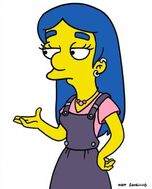 Retrieved from "https://simpsons.fandom.com/wiki/Let%27s_Go_Fly_a_Coot?oldid=731394"
Community content is available under CC-BY-SA unless otherwise noted.