Pontiac (Dodge in Separate Vocations, The Simpsons Road Rage and The Simpsons: Hit and Run

Early on, Lil' Bandit appears to resemble a 1969 Dodge Charger, red in "Separate Vocations" and blue in "Homer's Triple Bypass" and then red again in "22 Short Films About Springfield". The license plate all 3 episodes reads "EX CON". In "Realty Bites", it changes to a red 1968 Pontiac Firebird with the license "GR8 68". The Springfield Police are holding a police seized-property auction, and Snake discovers to his horror that his car is one of the lots. He vows to kill whoever buys the car, which turns out to be Homer Simpson. Snake treated it well and tuned it for high performance, but Homer abuses the car and fills it with regular gasoline instead of premium. After setting some traps to kill Homer and get his car back (one of which only serves to maim Kirk Van Houten), Snake gets the jump on Homer and they brawl on the hood of the car. It crashes into a large house, injuring them both. Earlier in that episode, Homer shows off his new hot rod to his friends Lenny, Carl and Moe. Moe, appearing to be a car enthusiast, looks under the hood and discovers it is equipped with an Edelbrock Intake and a 6-barrel Holley carburetor. He fools Homer into thinking it is also equipped with "Myahoff lifters", which are not real.

In earlier episodes, Lil' Bandit is a red 1969 Dodge Charger R/T with an automatic transmission and unknown V8 engine, the license plate said "EX CON", "Separate Vocations" showed the gas pedal is purple and shaped like a 3 toed footprint. In "Realty Bites", the car is a red 1968 Pontiac Firebird Trans Am convertible with a decal of a green cobra holding a pistol in it's tail with the car's name above it on both the driver and passenger doors, souped-up to become a hot rod. The license plate said "GR8 68" , and the car also has a manual transmission. In the opening sequence of "To Surveil With Love" the car appears to be the same one from "Realty Bites" only now the cobra decal is replaced with a flaming skull decal and the name "Lil' Bandit" is now missing. The license plate now says "891 231".

In The Simpsons Road Rage and The Simpsons: Hit and Run, the car is modeled after a 1969 Dodge Charger: This is evident by the hideaway headlights, long rear end, split grill and overall "General Lee" look, like his car in "Separate Vocations", rather than Lil' Bandit as it appeared in "Realty Bites". In Road Rage, the cobra decal and name is missing, a red oval shaped FTW sticker can be seen on the dashboard . In Hit & Run, what appears to be a body wrapped up in sheets can be seen in the boot of the car when it is damaged heavily, once Snake's bonus mission "Milking the Pigs" in Level 6 is beaten the car is unlocked for the player.

In the opening sequence of To Surveil With Love

The FTW sticker on the dashboard as seen in Road Rage 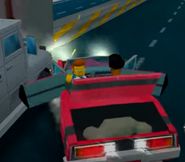 The body seen in the boot in The Simpsons: Hit & Run