Ling Bouvier (Mandarin:灵·鲍维尔) is the adopted daughter of Selma Bouvier after she discovered that she had reached menopause.

Selma adopted Ling in Beijing, China after discovering that she had reached menopause. She lied about being married to Homer Simpson, in order to fool the local authorities into thinking that Ling would be part of a traditional family as opposed to a single mother. Though she and Jacqueline Bouvier have only been seen once together, Jacqueline is her adopted grandmother. It is later revealed in "Changing of the Guardian" that Selma and Patty push her to her limit in numerous hobbies and fail to praise her. It’s unknown who her biological parents are nor is it known if they’re alive or deceased. She also has diabetes, which she was more than likely born with.

Ling has a weird habit of squeezing Homer’s eyeballs, which he doesn’t seem to mind, even though it would hurt.

Ling was seen at the "Midday Mommies" with Maggie, Baby Gerald, Sashi Nahasapeemapetilon and Noah's Sister.[1] She also played with her cousin Maggie when Selma and Abe babysat.

In her first appearance in "Goo Goo Gai Pan", she only made a few appearances making baby giggles and her only actual word in the series was "mama". During her other three appearances, she did not talk. She has a laugh similar to Selma.

She appears slightly older by "Changing of the Guardian", walking, exhibiting manual dexterity, and even performing gymnastics. She also seems able to speak in complete sentences, saying "Help me!" to Marge.

Note: All of Ling's major appearances are in bold. 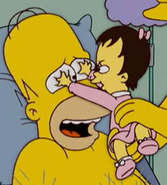 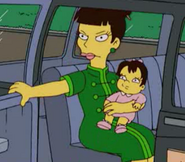 Ling being taken away by Madam Wu. 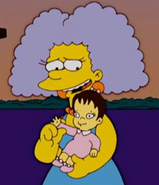 Ling and her adoptive cousin, Maggie.

Maggie and Ling sleeping together.

Ling at the "Midday Mommies" club.

Ling in the Gifted Area.

Ling playing the flute in "Changing of the Guardian".

Ling as she appears in "Changing of the Guardian".

Ling at her adoptive grandmother's birthday