“HEY, YOU! GET OUT OF MY OFFICE!”
―Hutz angry at Homer for tipping and being in a phone booth.

“Mr. Simpson, this is the most blatant case of fraudulent advertising since my suit against the movie, The Neverending Story!”
―Hutz proudly to Homer after he tells him his story about the "all-you-can-eat" seafood

“You're one of a kind, Marge, and nobody deserves this more than you.”
―Hutz's final onscreen dialogue[src]

Lionel Hutz, also known as Miguel Sanchez, and also known as Dr. Nguyen Van Phuoc, is a lawyer in Springfield, albeit an incompetent one. He was always desperate for cases, few of which he won. Hutz was financially insolvent, extremely poor and willing to do nearly anything for money. The character of Lionel Hutz, along with other Phil Hartman characters, was retired after the actor's death.

He was an inept ambulance chaser and, to quote Lisa, a "shyster", whom the Simpsons nonetheless repeatedly hired as their lawyer (a fact remarked on by Marge in a typically self-aware aside) probably because they could not afford a better lawyer anyway. He claimed to have graduated from Princeton school of law, although Princeton hasn't had a law school since the mid-19th century. His legal practice, located in a shopping mall, was named "I Can't Believe It's A Law Firm!". He often tried to entice potential clients with free gifts, including a "smoking monkey" doll and a business card that "turns into a sponge when you put it in water." Lionel Hutz was an occasional person to appear in The Simpsons's lives and sometimes played central roles in events involving them. Marge distrusted Lionel Hutz because he was an incompetent lawyer, even remarking once during a trial "We really should stop hiring him." This mistrust worked its way to Hutz's rival known as the Blue-Haired Lawyer who is also aware of his incompetence and greed. During cross-examination, Marge testified against Hutz out of spite because he hired Dr. Riviera, a quack to give out false prognosis and made Bart commit perjury by lying about being in intensive pain when he was fine. Hutz was also briefly married to Selma Bouvier, as when Homer asks her to marry Apu for his citizenship she says her name with 3 husband names added (Terwilliger, Hutz, McClure) and was long enough without Apu's long surname.

Hutz is also very greedy and will resorts to any means necessary to make money as well as making attempts to avoid punishments which was shown in "Selma's Choice", where he attempted forgery by editing Gladys' will but he was caught by Marge where he then casually admits to forging other people's wills and has been successful (forgery is in fact a very serious crime that can result in 5 years in prison as well as receiving a fine that can range between $250 to $125,000 depending on the seriousness of the crime). Hutz also destroyed his possessions in an attempt to change his identity.

Hutz was a recovering alcoholic; also at one time he hastily left the courtroom after handling a bottle of bourbon in order to consult his A.A. sponsor, musician David Crosby. Also, Hutz referred to bourbon as "brownest of the brown liquors" and offered to share with Marge and Homer "a belt of scotch" at 9:30AM, explaining that he "hadn't slept in days."

Jobs Outside of Law

Beyond the law, he also tried his hand at selling real estate.[1] When Homer hired him to babysit the Simpson children, he renamed himself Miguel Sanchez following some trouble that prompted him to change his identity and burn all his personal papers, and he later changed again to Dr. Nguyen Van Phuoc, a Vietnamese name, in addition to Mr. Sanchez. He also won the role as 'Mitch' in the musical adaption of 'A Street Car Named Desire', whilst simultaneously suing the troupe on behalf of the people who were not cast. He may also be a drug dealer, as when Milhouse lands the role of Fallout Boy, Hutz barged up to him and one of the services offered was "drug deal- errrrrr.... keeper awayer". He also owns Red Blazer Realty, which employs Cookie Kwan "Number 1 on the West Side!", Gil Gunderson (Shelley Levene from 'Glengarry Glen Ross'; as played by Jack Lemmon), and at one point, Marge. As well, he's been shown to take part-time work as a cobbler, fixing up shoes in his clients' presence and even in court ("Uh, Judge, these won't be ready until Thursday...)

Although Hutz lost almost all of his cases, he did win several cases for the Simpsons, for instance representing Homer in his case against Captain McCallister and The Frying Dutchman restaurant over its "All You Can Eat" offer. While the Blue-haired Lawyer tried to show that Homer's eating was far beyond what could reasonably be expected out of an all-you-can-eat offer, Hutz won by putting Marge on the stand and having her reveal the desperate actions she and Homer took after they were kicked out of the restaurant. At Hutz's urging, Marge tearfully admitted that after searching for another All You Can Eat fish restaurant until 3AM, Homer and Marge "went fishing." Considering Marge's honest nature, it is unlikely that she was lying. The case was helped by the fact that the entire jury was made up of obese jurors. Captain McCallister then struck a deal with Homer, offering him all he could eat in exchange for using him as a sort of freak show attraction to get more customers.[2]

Another case he won for one of the Simpsons was when Bart discovered that an old tramp named Chester Lampwick was the real creator of The Itchy & Scratchy Show, which was proved by an old drawing by Lampwick. Roger Myers (who had falsely claimed credit for the creation) then had to pay him $800 billion, which forced the Itchy & Scratchy Studios to temporarily close down. Although none of this had anything to do with Hutz's skills as a lawyer.[3]

Hutz also successfully sued Krusty after Bart got appendicitis after eating a piece of jagged metal that was being given away as a prize in his cereal that wasn't even in the safety package all prizes are held in. The case was won and Bart was given $100,000 in compensation. $99,500 of which was taken by Hutz who'd assembled a team of phony lawyers to make it seem to Bart that it was necessary.[4]

The following is a list of people whom Lionel Hutz has represented and/or defended in court.

Hutz additionally represented Homer against the Devil (Ned Flanders). At issue was the rightful owner of Homer Simpson's soul. In a hastily assembled courtroom in the Simpsons' living room, before a jury of the damned, Hutz discussed competently the nature of a contract, although his argument ironically was harmful to Homer. Despite the fact that the contract between Homer and the Devil clearly awarded Homer's soul to the Devil upon Homer's consumption of the 'forbidden doughnut', the jury found a note from Homer to Marge saying that he pledged his soul to her for all eternity thus his soul was not to rightfully give up to the Devil causing them rule in favor of Homer. In retribution for losing the court case, Homer was cursed by the Devil and his head was turned into a giant doughnut. The case was not won so much for Hutz's skill as an attorney, but by Marge's introduction of the relevant evidence (the photo with a note from Homer on the back, granting his soul to Marge).[10]

In The Simpsons: Hit and Run, there are signs on the Matlock Expressway that advertise the Lionel Hutz Law Firm, which also says, "30 minute settlements, or your pizza is Free!".

The character was retired after Phil Hartman's murder in 1998, as well as his other main character Troy McClure. Hutz made his final speaking appearance in Season 9 episode "Realty Bites".

Since the Simpson family frequently appears in court,[11] other characters have represented the Simpsons in legal matters since the retirement,  ranging from just as incompetent to actually knowing what they're doing. For example, in "Sweets and Sour Marge", the equally-incompetent Gil stepped in. The Blue-Haired Lawyer has also served as the family's attorney, such as in episodes like "Orange is the New Yellow".

Lionel Hutz still appears infrequently in clip shows and flashbacks, as well as crowd scenes, but only in non-speaking roles (with his last reported appearance being in Season 27 episode "The Burns Cage"). Hutz and McClure still sometimes appear in Simpsons Comics, as a voice actor is not needed.

2nd official image of him 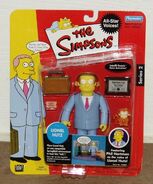 Mr. Hutz's first appearance Bart Gets Hit by a Car

Mr. Hutz was a recovering alcoholic

"What color tie am I wearing?"

"I'm not wearing a tie at all" Mr. Hutz in Marge in Chains 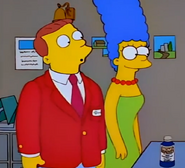 Mr. Hutz scolds at Marge for the damages of the Murder House. 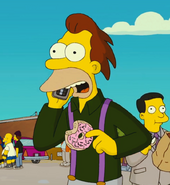 Mr. Hutz again in "Four Regrettings and a Funeral", yet his hair and suit colors have changed 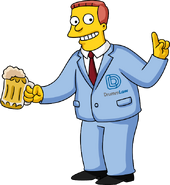