"The Boys Bathroom is not a water park."

“I can't believe I used to go out with you.”
―Ralph Wiggum to Lisa

"Lisa the Vegetarian" is the fifth episode of Season 7.

After a trip to Storytown Village, Lisa finds herself unable to eat meat, exposing her to ridicule and resentment from Homer and friends. But with help from Apu, Paul and Linda McCartney, she makes an effort to stick to her new vegetarian view.

Grampa and the Simpson family visit Storytown Village, which is a boring amusement park for 1-7½ year olds. (Marge had previously said that the trip would be fun for everyone, including Lisa, who is eight.) They also visit the park's petting zoo and are immediately enraptured as they see one little lamb after another, each more absurdly adorable than the one before it.

Upon returning home, Homer finds out that Ned Flanders is throwing a family reunion. In his typical impulsivity, Homer decides to throw his own barbecue and only invite who he wants, i.e., not Flanders. Of course, when Flanders asks if he can come, Homer says “Sure!” without thinking, and follows it up with a trademark “D’oh!”.

That night, Homer tells the family about the BBQ he is going to host, Marge thinks this would be a great way to get to know everyone outside the usual court setting. Marge serves lamb chops for dinner, but Lisa cannot bring herself eat them as she keeps hearing the bleating voice of the lamb at the petting zoo. Lisa pushes her plate away. Marge, trying to help, offers her rump roast, chicken breast, and hot dogs instead, but Lisa makes the connection between these dishes and their living counterparts and decides to become a vegetarian.

The next day, at school, her newfound vegetarianism becomes a problem when she is almost forced to dissect a live worm whom she imagines pleading, "Li-i-isa, what did I ever do to you-u-u-u?". Lisa is a little confused ("Why does it talk like a lamb?"), but no less committed to her cause, so she refuses to dissect it, causing an independent thought alarm to be hit. At lunch, the only vegetarian option is a hot dog bun, which Lunchlady Doris proclaims "rich in bunly goodness". Lisa's caustic questioning of the exact point when Doris lost her enthusiasm for her job results in the second secret "independent thought alarm" she triggered that day, prompting Seymour Skinner to think that the students have become overstimulated. He orders Groundskeeper Willie to have all of the colored chalk removed from the classrooms, but he furiously rants that he warned them before because, in his opinion, the chalk had been "forged by Lucifer himself".

Skinner then tells Lisa's class that there is an independent thinker (whom he will not reveal, but unknowingly does so) in the class and shows them a (rather dated) Troy McClure video of Troy and Jimmy looking at cows getting killed and proposing the idea that "cows might eat us if we don't eat them". Everyone is fine with the film, Ralph even says he'll work there when he grows up, Lisa however is not amused. At home, after watching an Itchy and Scratchy cartoon about eating meat, Lisa cannot believe the message the show is promoting but Bart tells her there are no lessons in this cartoon, just pointless humor. Homer then comes in and shows off his pig-shaped invitations, which advertise his "BBBQ," with the extra "B" standing for "BYOBB" (The extra "B", according to Homer, is a typo). Lisa's newfound vegetarian stance is not tolerated nor understood very well, either, with Homer and Bart both mocking her for rejecting meat and tease her singing, "You don't win friends with salad!"

Soon enough Homer's barbecue day has come and is in the backyard. Lisa, who is becoming increasingly self-righteous regarding her vegetarianism, brings gazpacho to the barbecue even telling people they don't have to eat any meat, but is laughed at both in the yard and in her room. During the barbecue, while Homer is serving up the burgers, one lands where Lisa is sulking on her bed as she resents the party-goers for rubbing their carnivorous habits "in [her] face". After the burger lands on her face, making her furious.

Homer brings a roast pig for the party, but a furious Lisa climbs aboard a riding mower, and drives away with the roast pig in tow. Marge tries to stop Lisa, but, yells, “Bart! No!” followed by, “sorry, force of habit” when Bart reminds her it is Lisa who is misbehaving. Homer and Bart chase after Lisa and the pig, but she pushes the pig off of a slope before Homer and Bart can catch her. The pig rolls through bushes, into the river, and is shot into the air by a hydroelectric dam's suction. While this is happening, the flying roasted pig passes by Mr. Burns' office at the Springfield Nuclear Power Plant, ironically just seconds after Burns admitted to Smithers of donating to a children's fund "when pigs fly".

Back at home, Homer scolds Lisa for ruining his barbecue and sends her to her room until she apologizes, but she rebukes him and says that he was wrong for serving and eating meat and even says she doesn't have to nor is she going to apologize for standing up for a just cause. Lisa and Homer are too angry to speak to one another, so they argue. Lisa, depressed and angry due to her family not respecting her vegetarianism, leaves the house. While walking, she is mocked and laughed at by classmates and gets hit with a barrage of bad meat-related advertisements. The pressure to conform to a carnivorous society finally becomes too great, prompting Lisa to grab a hot dog off of the grill at the Kwik-E-Mart, and take a bite, she then shouts, "There! Is everyone happy?!"

However, Apu, who is also a vegan himself (though he erroneously states he is a vegetarian on the show), reveals that, in fact, she has eaten a tofu dog (he made a switch from regular to tofu and no one noticed the difference). He then takes her through a secret passageway to the garden on top of the Kwik-E-Mart roof, where she meets Paul and Linda McCartney who are also vegetarian. One brief heart-to-heart later, Lisa is committed once more to vegetarianism. She also learns an important lesson from Apu: While it is okay to have her own views, she should tolerate other people's views instead of bringing them down.

Thus inspired, she returns to make up with her father, and finds him in the street shouting her name, exposing his fear of being viewed as a bad father. Lisa apologizes to Homer, admitting that she had no right to ruin his barbecue and to try forcing others to stop eating meat, however she declares that she is going to remain a vegetarian. Eventually, Homer forgives her and offers her "a veggie back ride". During the end credits, the roasted pig is seen still flying through the air.

MSNBC listed the episode as their second favorite in the show. They called the “You don’t win friends with salad” song "one of those archetypal Simpsons moments, one in which the writers hit a joke so long that it goes from funny to unfunny and back to funny again". 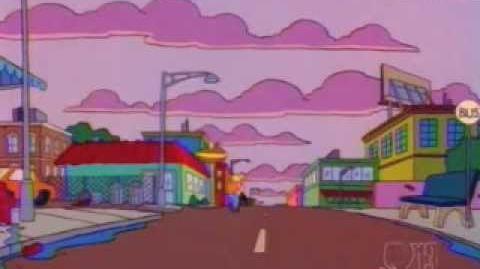