I did not see Teacher applying for welfare.

A blimp with Mr. Burns' picture on it flies by.

Chris Hansen, Mark Zuckerberg, and Muhammad Yunus as themselves

"Loan-a Lisa" is the second episode of Season 22.

When Grampa gives each member of the family a portion of his savings, Lisa invests in Nelson's brand-new business venture, but soon realizes that her friend's instant success might lure him away from the classroom. Worried that his judgment might be clouded, Lisa introduces Nelson to Facebook creator Mark Zuckerberg, only to find out that he also dropped out of school. But when Nelson's business suddenly takes a sharp turn, Lisa teaches her partner that education is invaluable.

After watching an episode of Itchy and Scratchy, the Simpsons arrive at the Springfield Retirement Castle to visit Grampa before going to have breakfast. Grampa plans to give everyone their inheritance before he passes on, which turns out to only be $50 each. Each member of the family spends their money differently. Marge purchases a handbag that she thinks is for $50 but it turns out to be for $500 and the label was just bent. Helen Lovejoy, Julio and Bernice Hibbert motivate her into buying it and she does.

When Marge reveals the price to Homer, he is surprised. He does, however, take Marge out to a fancy restaurant, Asia de Cuba. After the waitress observes Marge's handbag, she moves them from a bad table by the toilets to a window table with a great view of Springfield. After avoiding many hazards that could get her bag dirty, a single drop of sauce gets on it. Marge takes back the bag and gets a full refund, despite the stain. This gives Homer an idea. They purchase expensive objects, use them, and turn them back.

Meanwhile, Lisa is looking on the internet for where to invest her $50. She sees a website about micro transactions, with Muhammad Yunus doing a speech about it, and she finds that Nelson has a business, Snot Wheels, in which Lisa invests in. After this investment, the business picks up and Nelson ends up making loads. Nelson reveals he want to leave school and when Lisa tells Principal Skinner that Nelson is paying $11 per hour, he goes to work for Nelson.

Homer invites Lenny and Carl around to have a party, although everything is boxed up or unusable due to the fact they want to return it. When they do return everything, Homer gets caught by Chris Hansen and is filmed for his TV show, To Catch a Credit Whore and Homer takes off.

Lisa takes Nelson to an entrepreneurs expo in the hopes that one of them will inspire him to stay in school. Unfortunately the first one they meet is Mark Zuckerberg, the co-founder of Facebook who reveals that he, Bill Gates and Richard Branson all left school and became successful, by stark contrast the janitor at the convention not only attended Harvard but graduated with honors, this totally destroyed Lisa's argument. Nelson becomes convinced to leave school even more. However, his bike business fails when all of the bikes fell apart as he was using water soluble glue and he goes out of bankrupt and plans to stay at school.

Lisa and Nelson go to a roller-skating rink and hold hands "for balance" and knock people over, including Mark Zuckerberg, and when they do saying "Haw-haw!" and "Sorry!". When Mark updates his status on Facebook to say that "Mark Zuckerburg is in INTENSE PAIN!" Nelson then comments "Haw-haw!" and Lisa "Sorry".

Rowan Kaiser called the episode "amazing" and said "spending time with The Simpsons tends to make me happy, and nothing about this episode was particularly terrible". He gave the episode a B- the second highest rated grade after American Dads, "100 A.D." and beating The Cleveland Show episode "Cleveland Live!" and the Family Guy episode, "Excellence in Broadcasting". TV Squad's Brad Tachek gave the episode a positive review as well saying "Tonight's episode wasn't quite as good as last week and just about as preachy, but it was still a good example of what makes 'The Simpsons' great." 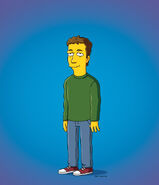