“From now on, forget everything you thought you knew about Luann Van Houten ”
―Luann following her divorce from Kirk

Luann Van Houten (nee Mussolini)is the cousin as well as wife of Kirk Van Houten and the mother of Milhouse Van Houten. She has been married to Kirk, divorced due to an argument at one of Homer and Marge's disastrous dinner parties,[1] and later remarried to Kirk.

Luann is apparently of Italian and Greek descent. Her mother, Sophie, is Italian, although Luann never speaks Italian or is seen with her mother (who remains in Italy with Luann's half-brother, Bastardo). Luann was born in Shelbyville, a town founded on the principle of freedom to marry one's cousins.[2] Her birthday is December 1. She lacks the stereotypical exaggerated mannerisms associated with most other Italian-Americans in Springfield, such as Fat Tony or the chef Luigi Risotto. When younger, she went to "Camp Land-A-Man" (which basically served as a finishing school) with Marge, Patty and Selma, the future Helen Lovejoy (maiden name unknown), and future realtor Cookie Kwan.[3]

Luann was married to her cousin Kirk Van Houten and gave birth to Milhouse. Their marriage came to an unhappy end; after an argument over a game of Pictionary, she leaves Kirk. Although Kirk found single life tough, Luann used her newfound freedom and heretofore stifled promiscuity to live life in the fast lane.[4] Luann began dating American Gladiator Pyro shortly after her divorce, but was caught cheating on Pyro with his (former) best friend, Gyro. It is implied that Luann had a one-night stand with Otto in the episode Moe Letter Blues after Otto tells Kirk "even I hooked up with your old lady" before apologizing to Milhouse, who says that Otto is his "favorite uncle". Even while married to Kirk she attended a key party at which she slept with Dr. Hibbert.[5] Luann also dated Apu,[6] Disco Stu, and Captain McCallister.

When the Van Houtens are on the verge of reuniting, Bart and Milhouse hatch a scheme to get them to separate again (because Milhouse enjoyed their fighting over him and trying to buy his love). The scheme backfires and nearly results in the separation of Homer and Marge. Since then, they are often seen together.[7] After some years, they decide to marry again. Their honeymoon goes wrong when they are lost at sea and stranded on an island, believed to be dead. When they are rescued, they go back to Springfield, fully reconciled.

Luann, Kirk and Milhouse all look so similar that Bart once asked Luann and Kirk if they are siblings.[8] In the season 26 episode Let's Go Fly a Coot, Milhouse tells Bart that his parents are actually cousins.

Luann has bob-cut blue hair and red round glasses. She wears many different outfits. She sometimes wears white pearl earrings.

Luann is voiced by Maggie Roswell, but she temporarily became a non-speaking character when Roswell was forced to leave the show after a pay increase dispute. However, she did have 1 quote in season 25.[9]when Maggie Roswell returned to voice Maude Flanders (ghost) in Treehouse of Horror XIII and Helen Lovejoy in The Simpsons Movie.

Luann in her First Appearance

Luann in "The Devil Wears Nada" as Betsy Ross

Luann in her jacuzzi suit 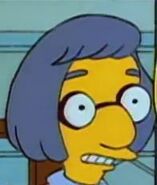 Luann with a different haircut
Add a photo to this gallery

Retrieved from "https://simpsons.fandom.com/wiki/Luann_Van_Houten?oldid=677656"
Community content is available under CC-BY-SA unless otherwise noted.