Lucille Botzcowski, also known as Ms. Botz and The Babysitter Bandit, was once the babysitter of Bart, Lisa, and Maggie. She mainly appears in only one episode, which is Some Enchanted Evening posing as the Simpson Babysitter.

Lucille Botzcowski was an escaped criminal, known as "The Babysitter Bandit". Hired by Homer from the Rubber Baby Buggy Bumpers Babysitting Service, she was to babysit the kids while he and Marge stayed at a motel. After her arrival, the children discovered her true identity as robber on a television show, but were captured and tied up before they could stop her. She then started looting The Simpsons' house, but was eventually thwarted and captured by Bart, Lisa and Maggie. While the kids called for help from a pay phone, since Lucille had disabled the house phones, Homer and Marge returned home, only to find The Babysitter Bandit hog-tied with her mouth taped shut so she couldn't call for help, staring uncontrollably and helplessly at The Happy Little Elves videotape. Deceiving Homer into freeing her, she advised him "Don't turn your back on that boy for a second" before escaping in time to evade the police. She made a brief appearance in "Bart Gets an "F" while the Springfield residents stood in a circle and sung during the snow day festivities. Ms. Botzocowski apparently remained free for some time as she was briefly mentioned in a newscast in "Bart's Dog Gets an F" that police are looking for her.

A wanted sign featuring her photograph was briefly depicted on the notice board in the Springfield Police Station behind Chief Wiggum's desk, but showed her sporting brown hair.[1] She later appeared to have been arrested and remanded to an insane asylum, as she was seen in a cell at Calmwood Mental Hospital, pacing back and forth. The cell door was unlocked and unguarded;[2]it is unknown if she escaped or not, although she did briefly appear in her car in the non-canon Family Guy crossover "The Simpsons Guy." 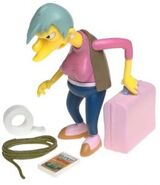 Toy with accessories
Add a photo to this gallery

Retrieved from "https://simpsons.fandom.com/wiki/Lucille_Botzcowski?oldid=656233"
Community content is available under CC-BY-SA unless otherwise noted.