"Much Apu About Nothing"

Manjula is Apu's wife and mother of their eight children. For a reference of Manjula's age refer to episode see, Much Apu About Nothing. She is often seen wearing a red dress, yellow shoes and gold jewellery.

She was arranged to be married to Apu when she was eight[1] and Apu was to set out to the United States for college.[2] She looked forward to it all her life. She occasionally works at the Kwik-E-Mart alongside Apu, but she is usually seen as a homemaker. She claims that Fried Green Tomatoes is her favorite book, movie, and food. When the octuplets are born, she sternly informs Apu that he cannot die until they are out of college.

She has excellent culinary skills, demonstrated by her ability to make a wide variety of dishes using only chickpeas, lentils, and rice, or sometimes only chickpeas and lentils. She says when Apu dies, she will sell the store and will marry Sanjay. She is shown to be very judgmental and nitpicks at nearly every thing Apu does [3][4][5], as well as Marge during their meetings at the Midday Mommies club[6].

Manjula is shown to have fair-weathered friendship with Marge, much like the rest of the women Marge hangs out with. Manjula cares for her babies, but sometimes she gets stressed like Apu; when he told her of a wonderful dream he had involving his death, she refused to allow him to die before the octuplets left college.

Her relationship with Apu has not always been in good condition. When Manjula discovered that working 18 hours a day including weekends was not how Americans worked, she got mad at Apu, since she thought he didn't want to see her. He compensated for this with seven surprises for Manjula before Valentine's Day, though he nearly suffocated due to being encased in chocolate for one surprise.[7] Apu once had an affair with a Squishee lady. After Homer discovered this, he and Marge revealed their discovery to Apu, who eventually caved into the guilt and vowed to apologize to Manjula. However, she already knew it and kicked Apu out of the house. With some help from the Simpson family, Manjula eventually agreed to give Apu another chance after he completed an often-vengeful list of bizarre grueling tasks fashioned by her, such as performing "My Fair Lady" with the octuplets[8]. Since then, their relationship has been strained, with the couple seen attending marriage counseling, though their relationship may have been improved by the Trappuccino ordeal as they were seen kissing and celebrating their liberation with the octuplets. She happens to get angry whenever Apu talks about Lady Gaga and Justin Bieber. 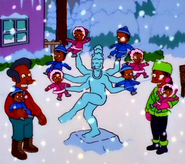 The family during the snow day

Manjula as a child

Manjula at her wedding with Apu

an official image of Manjula
Add a photo to this gallery