As the Switch Witch 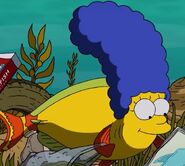 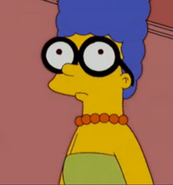 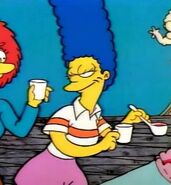 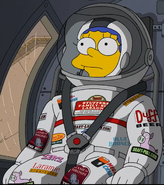 In her Fashion Dress

In Swimsuits and Bikinis 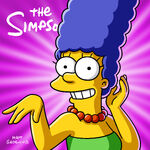 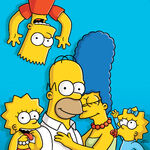 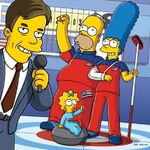 Marge Simpson weightlifting in Strong Arms of the Ma

Marge with a gun

Marge the Witch trick or treating

Sexy Santa Marge
Add a photo to this gallery

Marge, as she appeared in the first Simpson short, Good Night

Marge in the series' opening sequence

Marge in a bikini

Marge in a police outfit

Marge with her family sitting on the couch

Marge with a funny face

Marge is attacked by a Vac-U-Bot

Marge as a skeleton

Marge in a jacuzzi

Marge taking off her robe

Marge and Maggie in Hawaiian clothes

Marge with a coconut bra

Marge taking a shower with a large clump of hair clogging the drain in Simpsoncalifragilisticexpiala(Annoyed Grunt)cious.

Marge looking at her phone as seen in Moho House

Marge wearing a swimsuit and sarong

Marge in her linguine

Marge's smile after being injected with a drug

Marge wearing a wetsuit in The Bonfire of the Manatees

Marge wearing a wetsuit in I Want You (She's So Heavy)

Marge wearing a suit of Armor in Helter Shelter

Marge riding on a bulldozer.

Marge smoking a cigarette in Marge on the Lam . This is one of only two times that Marge smoked a cigarette on a Simpsons episode, the only other being The Mysterious Voyage of Homer.

Homer and Marge in prison.

Marge naked with Homer in bed.

Marge shocked after seeing her fat.

Marge suffering pain in her shoulder.

Marge with a burger head

Marge with a printer head

Marge with a new look as seen in Moho House

Marge with Homer in Looking for Mr. Goodbart

Marge tries to walk, now that her chest is bigger

Marge on the couch with Duffman

Marge in one of Homer's flashbacks

Marge as an emoji

"That money was supposed to de-stink our children, and instead you bought a 'doohickey' to stuff your greedy face!"

"There's no guy with peanuts, dear."

"Bart, I told you don't draw on your father's skull!"

"You bought a grill?"

An inside out Marge singing to the tune of "One" with inside out Homer, Bart, Lisa, Maggie, and Willie