Marge Ziff is the name of an alternate version of/looks like Marge Simpson.

After Bart makes it so that Marge and Homer never got together, Marge got married to Artie Ziff. She had a son with him, called Bartie Ziff.

After Artie and Bartie beat up the United Federation of Homers Through History, Marge realized that she had married the wrong man and got together with all the Homers.[1]

After Professor Frink created an alternate Springfield where Marge is mayor and married to Artie Ziff, with a trouble-making daughter called Lisa.

After she met Homer Simpson, Mindy's ex-husband, she falls is in love with him.[2] 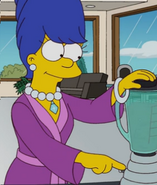 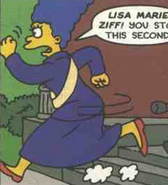 Retrieved from "https://simpsons.fandom.com/wiki/Marge_Ziff?oldid=888513"
Community content is available under CC-BY-SA unless otherwise noted.