"Marge Be Not Proud"

Charles Martinet (normally)
Dan Castellaneta
Hank Azaria
Mario is a famous video game character created by Nintendo. He was one of the four characters that convinced Bart to steal a game from local supermarket.[1] In "Homer and Ned's Hail Mary Pass", he came off the "Italians Touring America" tour bus to laugh at Homer, so Homer threw barrels at him in the style of Donkey Kong and Mario climbs into Bart's treehouse to avoid them and is eventually killed by one. Mario, with his brother Luigi, are two of the citizens of Bro-Land. Mario is the star of the Super Mario games. He wears a trademark red hat, blue dungarees, and a red shirt (in his first appearance in Donkey Kong, the colors of his shirt and dungarees are reversed). A gnome-like parody of him also appeared in The Simpsons Game. 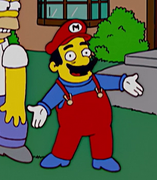 Mario and his brother Luigi

Mario and others tempting Bart to steal a video game

A bearded dwarf that bears a similar resemblance to Mario, as seen in The Simpsons Game

Dwarf Mario as a character in the game

Dwarf Mario seen in the crowd

Homer and Mario in a scene parodying Donkey Kong 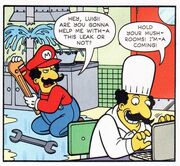 Mario talking to Luigi Risotto
Add a photo to this gallery

Retrieved from "https://simpsons.fandom.com/wiki/Mario?oldid=924935"
Community content is available under CC-BY-SA unless otherwise noted.