Martin Prince, Jr. is Bart's classmate, and is Lisa's rival in intelligence. He is Nelson Muntz's favorite target for bullying, except for Milhouse. He is an academically brilliant teacher's pet, and is portrayed as a stereotypical nerd. Martin is a 4th grade student at Springfield Elementary School. He is sometimes shown as Bart's friend due to the fact that he is occasionally seen with Bart, along with Nelson and Milhouse, though the fact remains that Bart still taunts him.

Martin is the son of Martin Sr. and Martha. He is an academically brilliant student. He is also a teacher's pet with the stereotypical nerd enthusiasms for science fiction, role-playing games and not-so-great fashion sense. He has an IQ of 216.[1] As the class nerd, he unwittingly becomes the perfect target for ruthless bullying at Springfield Elementary School. He is a member of the Springfield band, and is often seen with a French Horn. Martin often says "Behold!", "Pick me, teacher, I'm ever so smart!" and "Excelsior!".

Given Martin's fawning behavior towards adults and condescension towards his peers (such as successfully petitioning to have the school day extended by 20 minutes), most of Springfield cheers on his tormentors. An example of this is when Mrs. Krabappel assigns a World War I paper. Martin asks if he can type his report and then if it can be ten pages (minimum). Martin disappears almost immediately and Nelson lets the not particularly concerned teacher know that "he's gone now". Despite this behavior, Martin tries to be friendly with Nelson. Occasionally it is hinted that Nelson does not really want to be mean to Martin, and could potentially be a friend, if it were not for the pressure of maintaining his bad-boy image at school. Martin is somewhat overweight, as noted by Abraham Simpson once. He is sent to the weight loss section of the hellish Kamp Krusty. Although his father calls it "image enhancement camp", Martin sees right through this, shouting "Spare me your euphemisms! It's fat camp for daddy's chubby little secret!" The sexuality of Martin was initially the subject of various jokes and innuendos, although he has since denied being gay. It is more likely that Martin is asexual - Nelson taunts Martin about "gay funerals" one time, and Martin protests "I'm not anything yet!"[2] While non-canon in nature, Martin's future date to the prom turns out to be a robot.[3] 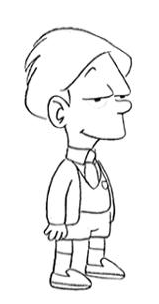 Once Bart challenged him for the class presidency. Martin, of course, has a comprehensive (though not particularly politically well-judged) platform which Bart, with the aid of Homer, picks apart with populist nonsense. In a debate, Martin begins to speak of the high level of asbestos in the classrooms. Bart interrupts and says "That's not enough! We want More asbestos! More Asbestos!," leaving the entire class chanting this arrant nonsense. Nevertheless, Bart still loses the election as Martin and his running mate Wendell are the only ones in the class who bothered to vote on election day.

Despite the natural animosity between Bart and Martin, the two have often joined forces. Sometimes they even appear friends and will work together when needed. Once Martin tutored Bart in exchange for lessons on being cool (although Martin betrayed Bart at the end of their collaboration). Martin and Bart also worked together on a soapbox racer. Bart, Martin, and Milhouse all pool their money to buy a copy of the first Radioactive Man comic. Also when Bart must wear corrective lenses and leg supports, and temporarily looks quite nerdy and becomes an even greater target for bullying. It is during this time that Martin and a group of nerds save him until he no longer has to wear his glasses or boots. When kids from Shelbyville steal Springfield's lemon tree, Martin joins Bart as part of the gang of raiders who seek to take the lemon tree back (Bart describes him as the gang's smart guy). Martin's closest friends are apparently Wendell, Database and the German exchange student Üter, who he has a resemblance to. {C

During one spring break, Martin accompanies Bart, Nelson, and Milhouse on a chaotic road trip to Knoxville, Tennessee. Bart is not very harsh on Martin (yet he mistakenly refers to him as "Milton" and is corrected by Milhouse) most of the time, but Martin can get out of control. Aside from being a bit snobbish, Martin once became a bad boy even worse than Bart, once slapped Bart on the head when Bart was sad that Homer didn't support him, and once threateningly held a small Shelbyville kid up against a tree, maybe as a result after all the bullying he suffers. 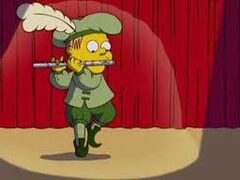 Over time, Bart has become less and less hostile with Martin to the point of total neutrality, but this has not stopped the Springfield Elementary bullies from continuing their traditional beating. Martin also has become less condescending and more passive. He is often depicted as too passive, since even Lisa Simpson can be a bit harsh to him, such as an event in which Lisa is initially blamed by Sherri and Terri for being responsible for stranding the group of children on a deserted island because she helped set up the disastrous field trip. Lisa in turn states that Martin seconded the trip, and because of that it is his fault. Martin has been known to casually hang out with Bart's group from time to time as well, and is often seen with Bart and Milhouse in the background. He is also occasionally seen with Ralph Wiggum. Martin also sits directly in front of Bart in their fourth grade class. Although they often work together on various school projects and classwork, it is implied in many episodes that Martin and Lisa are also rivals of a sort, especially when it comes to the Science Fair. Martin is seen grinning at the back of the bus, as it rides off without her. He proclaims that without Lisa there to grab the first prize badge, he will receive first place.

At the climax of the The Simpsons Movie, as Homer and Bart attempt to save Springfield by throwing Russ Cargill's bomb outside of the giant glass dome entrapping the entire town, Martin approaches his usual tormentors, Jimbo, Dolph, and Kearny, screaming I've been taking your crap all my life!. He then picks up a wooden two by four and beats them up as long over-due revenge.

Next to Milhouse, Martin is one of Nelson's favorite bullying targets. He is often inflicting many painful acts of bullying on him. In The Squirt and the Whale he is giving Martin a wedgie in an alley, causing Martin to make a very high-pitched noise. He is also seen giving him a noogey in Lost Verizon. He was also seen throwing tomatoes at him with fellow bullies, Jimbo, Dolph, and Kearney while Martin was dangling from the bleechers by his feet. Although Nelson often tries to pick on him, they are often thought of as good friends. In Lemon of Troy, he saves Martin from getting beat up by a Shelbyville kid, but Nelson appears embarrassed about it and claims he doesn't normally hang out with him. When Martin supposedly dies in Dial "N" for Nerder he sets out to solve who was involved in his death. When he finds out Martin's alive, he punches him, but says that he's glad he's not dead. In Grade School Confidential, Martin invites Nelson to his birthday party. When he places the invitation on Nelson's desk, Nelson pushes it off and gives him a rejectful sigh. Martin puts the invitation back on his desk, but he shoves it off again.

Unlike Nelson, the three of them show almost absolutely no friendship towards Martin. They often inflict many painful and embarrassing acts of bullying on him, like stringing him up the flagpole by his underwear. In Any Given Sundance when they needed to make sound effects for a video Lisa was making that involved Marge pounding meat, they made the sound by having Jimbo and Dolph hold Martin's arms while Kearney punches him. When Martin pleaded Lisa to have them turn to the next scene, it was just Marge pounding a different type of meat, much to Martin's disappointment. When the three bullies were trying to train Marge to be a MMA fighter in The Great Wife Hope, they had her punch a punching bag that had Martin inside of it. According to Martin, they put him in there because he looked them in the eye when they gave him his lunch money. When Marge asks him why he doesn't tell his principal, Principal Skinner pops out of the punching bag and says "I'm well aware of the situation". Although they inflict various act of bullying on him, he appears to be quite friendly with them. In Barting Over when he gets a tattoo of a unicorn on his cheek from a tattoo parlor (which he thought was a paint dispenser), he goes up to them a shows it off. When they inform him it was a tattoo parlor, he passes out. The bullies hesitate beating him up thinking, "He's suffered enough," but then choose to beat him anyway. When Martin offers to share his box of cookies from the bakery with someone who has a knife that can cut the ribbon that keeps the box closed in Boy-Scoutz 'n the Hood, Jimbo and Kearney willing cut the ribbon for him. Martin thanks them and says, "Now let's all share the goodness". Kearney then says "Share this!" before swiping the cookies from Martin and pushing him into a mud puddle. In Bye Bye Nerdie the three of them along with Nelson are seen throwing tomatoes at him while he is hanging from the bleechers by his feet. 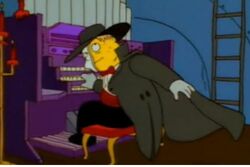 He attended Springfield High School and went to the prom with a robot. He most likely went to college and then returned to Springfield Elementary and became a teacher. There was a science fair explosion at Springfield Elementary. He was thought to have been killed, but he survived, although he admits that on a few days, he did wish that he had died on that day. He lived the rest of his life like the Phantom of the Opera under the school, playing music on an electric pipe organ. He also is one of the many pepole to donate their digestive track to Bart. In Holidays of Future Passed, he has turned into Marsha Princess. 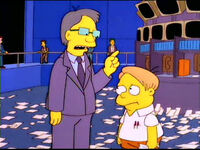 Martin appears mostly in the cutscenes of the level Mob Rules where he grabs Ned Flanders out of his car and takes off driving it while rushing home to play Grand Theft Scratchy. He eventually crashes the car into the side of the SequelStop store.

Cite error: <ref> tags exist, but no <references/> tag was found
Retrieved from "https://simpsons.fandom.com/wiki/Martin_Prince?oldid=307394"
Community content is available under CC-BY-SA unless otherwise noted.