Dan Castellaneta
Himself
For the creator of the Simpsons franchise, see Matt Groening.

Matt seems to be very acclaimed, since when people saw him at a comic convention, everyone went for him for an autograph. Matt told them they can also take a bit of his hair and to pull on his beard, as they say it's good luck.[1] However, when Homer sees a drawing of Bongo the Rabbit by Matt Groening (from his comic Life in Hell) and says Matt is not even a good artist.[2] He was once hired to draw a caricature of Freddy Quimby in a trial.[3]

Main article: Matt Groening
Matt Groening is the creator of the two television series The Simpsons and Futurama, one web series Disenchantment, and the comic strip Life in Hell. 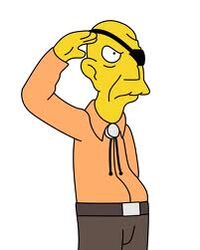 "Sure, I'll give an autograph anytime approach me in public or even on my private property. How about an original sketch or some of my hair? Don't forget to pull on my beard they say it's good luck." 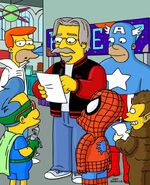