Maya is a beautiful woman whom Moe met over the Internet. She’s a little person, standing at about three feet tall.

While Moe and Maya were corresponding online, Moe was captivated by her looks, and by the fact that she liked his jokes and thought his photo was cute. When they met in person, Moe was shocked to see just how small Maya was. In Maya's online pictures showing her posing next to famous landmarks, camera angles plus the fact that she was actually in Legoland posing with small-scale replicas of the landmarks had made her appear to be of average height.

Despite this, they ended up hitting it off and had a good time going on dates. Moe worried what his friends and bar patrons would think of her, but Homer and Marge didn't even pay attention to her height, instead being impressed by her looks and her knowledge of how a Power Plant works.

Maya nearly married Moe, but he got too comfortable joking with her about her height, much to her chagrin. Moe tried to make it up to her by arranging to have a risky height-reduction surgery (to literally knock himself down to her size), but she convinced him not to. She then left Moe because she was put off by his willingness to try something so crazy, and also because she wanted to be with a man who was truly comfortable with her size. Moe's seeking the surgery, therefore, showed Maya that he wasn't the right man for her.

Moe was sad to see Maya leave, but he had many happy memories of her and kept her picture in his bar.

During the episode, Homer states that "if someone loved you once, they can love again." This could be a possible suggestion that Maya may come back, which eventually happens later.

Maya made a non-speaking cameo in "The Great Simpsina" among other small magicians, in a room opened by Raymondo, which suggests that Maya could be a stage magician.

Maya also appeared in the episode "Treehouse of Horror XXIV", in the third segment "Freaks No Geeks".

Maya next appeared in "Looking for Mr. Goodbart", where she was playing Peekimon Get.

At the end of "Flanders' Ladder", she is shown to be one of the many wives of Ned Flanders.

In "From Russia Without Love", Maya was seen in a flashback and mentioned by Moe as one of the women who broke his heart.

She returned in the Season 33 episode "The Wayz We Were", where she and Moe are now engaged to be married. 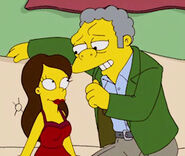 Moe showing a photo of Maya to Lenny and Carl. 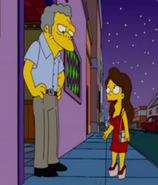 Maya in the Little Magician's room.

Maya pretending to have turned into a doll.

Maya in "Treehouse of Horror XXIV"

Maya and Moe in a Cafe

... to which Maya happily agrees this time