"The Mook, the Chef, the Wife and Her Homer

Michael D'Amico is Fat Tony and Anna Maria's son, and a student at Springfield Elementary School. Sherri and Terri describe him as "That weird kid who never says anything."

Michael is the son of infamous mafia boss Fat Tony, but he does not wish to follow in his father's footsteps and go into the family business of "Waste management." He has a passion for cooking and is a great chef. Due to his father's reputation, he was fearfully alienated by his classmates and school staff, except for Lisa Simpson, who befriends him.

His mother died when he was younger and has no siblings. Fat Tony was once hospitalized by rival gangs (The Calebresis) and Michael was offered to take over the mafia for a while. He didn't want to, so Homer and Bart Simpson took over the mafia instead, although later he apparently willingly poisoned the mafia that had attacked his father and seemingly concludes his friendship with Lisa telling her to not ask him about his work.

After his father's death in "Donnie Fatso," he is now under the care of his second cousin, Fit-Fat Tony.[1]

In the comics,[2] Michael has his own junior mafia, consisting Louie's son, Louie Jr., and Legs' son, Calves. He inducts Bart into it. They try to steal some stuff from the school before they're stopped by Lisa.

Michael surprised that Lisa wants to sit with him

Michael in the school's lunchroom

Michael: Don't ever ask me about my business, Lisa.

Michael notices how running the Springfield Mafia is turning Homer and Bart maniacal, and decides to put an end to it. 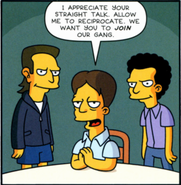 Michael in "The Man Who Came to Be Dinner"