Pamela Hayden
Milford Hjalmar Van Houten (presumbably born in 1850) is Milhouse Van Houten's ancestor. He married Eliza Simpson, even though he wrote in his diary that he could never set eyes on Eliza again after betraying Virgil Simpson, the black slave. Ironically, Milhouse states that the next day Milford drank bad well water and became blind, so he married Eliza (this is indicated by a wedding photo in the background during an interview) without setting eyes on her, as he had promised his diary.

Since Milford and Eliza are ancestors of Kirk and Milhouse Van Houten, Milhouse is a distant cousin to the Simpson children. Eliza's mother / Milford's mother-in-law, Mabel Simpson, is a common ancestor to Bart, Lisa, Maggie, and Milhouse. 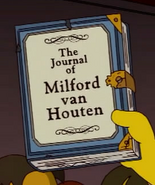 The Journal of Milford Van Houten
Add a photo to this gallery
Retrieved from "https://simpsons.fandom.com/wiki/Milford_Van_Houten?oldid=917146"
Community content is available under CC-BY-SA unless otherwise noted.