Moe's Tavern, or simply called Moe's, is the local tavern in Springfield. The bar is named after its owner, Moe Szyslak.

It is the only understood tavern in Springfield, although there is a Joe's Tavern in Shelbyville. Moe's is located right next to King Toot's Music Store; however, it will vary occasionally, and has been featured opposite Bart's factory, It Blows (the downtown air conditioner store) and a celebrity club. In the episode "Brake My Wife, Please", Moe's Tavern is shown to be only a brief walking distance from 742 Evergreen Terrace. It is also hinted that the tavern was kept in business because Moe frequently bribes Mayor Quimby whenever he pays an inspection visit.

Moe's is believed to be one of the places where "everyone knows your name"/ You can often find Homer Simpson, Lenny Leonard, Carl Carlson and Barney Gumble here, as well as other background characters and the owner Moe Szyslak. The tavern is notable in many ways. Located on Springfield's Walnut Street, it has the owner's office in the women's restroom, which is what Moe used as an office where he managed Homer's boxing career in "The Homer They Fall." The backroom often trades in endangered species and harbors fugitives, as well as being taken over by a pack of raccoons. The bar itself has supposedly never been cleaned; this was confirmed in the episode "Mayored to the Mob" when Homer and Mayor Quimby were in the bar and some cockroaches nearly walked off with Mayor Quimby's "change" (with Moe claiming that they were "taking care of the roach problem", although Mayor Quimby simply stated that Moe "should have seen the hospital", implying that the hospital's health hazards were even worse). The tavern also includes a safe room which Moe uses when held up by Snake and a whale. The Tavern originally didn't have a designated driver policy, but Moe ended up implementing one after its drunken patrons managed to cause an increase in car crashes.[1] (On St. Patrick's Day, Moe often tells the designated drivers to beat it due to not wanting any cheapskates on the biggest drinking day of the year.)[2] It is also open every day of the week except Wednesday, because it is on this day that Moe Szyslak goes to the local homeless shelter to read to the people there, or to the hospital to read to sick kids. The tavern is often robbed by Snake Jailbird. Moe also possesses a double barreled shotgun behind the counter.

The tavern has been the ongoing victim of Bart's prank calls in the earlier seasons to which he calls Moe supposedly looking for people with gag names that gets him laughed at by the patrons and ends with Moe threatening bodily harm to whoever prank called him. One prank call backfired on Bart, Hugh Jass, for there was a patron of the same name in "Flaming Moe's".

When Moe was young, he wrote a story about John F. Kennedy travelling back in time to save Abraham Lincoln from assassination to a comic book company, but it wasn't very popular with them. But Moe did manage to sell one story about an alien invasion to magazine publisher, Scifiometry. Moe got a letter from the company, and got $25 from them. Moe thought that was a great deal. He then got invited to the magazine company's social mixer in Arizona. The letter also mentioned an appearance fee. At the time, Moe didn't know how appearance fees worked, but he did manage to get $2000 that Scifiometry wanted by stealing from his neighbors. But after screwing up at the social mixer, Moe got kicked out. Moe realized after that it was time to start a business and went back to Springfield on a boxcar. Once he got to Springfield, Moe sold one of his kidneys for some money, and found an abandoned store and thought it was a good place to start his dream business, a shop that sells negligees for women. But the store was unpopular, and Moe ended up renovating it into a functioning tavern he dubbed "Meaux's Tavern" both as a way of evading loan sharks and the IRS, and to make the bar sound fancy.[3] At the tavern’s formal grand opening, it attempted to woo in customers with a positive demeanor, a luxurious décor, and even video game consoles.[4] "Meaux's" was eventually changed to "Moe's".

Moe’s Tavern has gone through several brief renovations before ultimately returning to its classic look each time. The establishment was briefly named Moe’s Cavern in 1985.[5] After the city of Springfield was briefly placed under Prohibition law in "Homer vs. the Eighteenth Amendment", Moe turned the tavern into "Moe’s Pet Shop"; this was later revealed to have actually been a cover for the speakeasy Moe operated under the Prohibition law. The tavern was renamed "Flaming Moe’s" during the short-lived craze over the medicinal alcoholic beverage with that same name.[6] After realizing the extra income he could receive by turning the tavern into a more family-friendly establishment, Moe redecorated the tavern once more and renamed it "Uncle Moe’s Family Feedbag", due to Moe’s lack of a staff to handle the demands of the new format[7]. After revisiting Swigmore University and being inspired by a cancer-ridden college professor of his, Moe had the tavern be given a post-modern remodelling and renamed it "M" in "Homer the Moe", but these alterations were reversed after several weeks due to Moe becoming unhappy with the new, reportedly snobbish, bar patrons. In “Mommie Beerest”, the tavern was a British pub called "The Nag and the Weasel"; and was co-owned by Marge Simpson. Moe turned the tavern into a gay bar called "Mo’s" for several weeks in "Flaming Moe".

Moe’s has also received extensive structural damage. It survived Hurricane Barbara in "Hurricane Neddy", numerous sinkholes opening up nearby, and has caught fire numerous times, both accidentally and possibly on purpose to collect insurance.[8][9][10] In “The City of New York vs. Homer Simpson”, after a police study determined that patrons of Moe’s Tavern were responsible for over 90% of all city traffic accidents, Moe established a designated driver policy in order to avoid being closed down.

The tavern was closed down due to toxic fumes that were being emitted as a result of it being in close proximity to the Burns Slant Drilling Co. oil drill, which resulted in Moe and the patrons (Barney in particular regarding the latter) swearing revenge against the one responsible for the drill, Mr. Burns. When Burns ended up shot shortly afterward, Moe and Barney were among the suspects, although Moe ended up cleared via a lie detector test, though not without suffering extensive humiliation regarding what Moe was planning to do upon leaving, while Barney was presumably acquitted after Maggie was revealed to be the one responsible for shooting Burns.

Homer has been banned from the tavern at least twice. The first time was for an incident where he played a prank where he unscrewed a pot of sugar that split onto the bar, causing everyone to vote to ban Homer from Moe's[11]. The second time was for an undisclosed incident where Homer had been late for his tab payment, requiring that he either pay the tab or at least clean up a mess in the restroom that Homer somehow caused, although this particular ban was overlooked when Homer became a bodyguard for Mayor Quimby and accompanied the Mayor to the tavern.[12]

Moe's has been turned into many different businesses in an attempt to obtain more money, such as a hip club, the gay nightclub "Mo's", a family restaurant, and in Homer's Barbershop Quartet its name is "Moe's Cavern", a parody of the club where the Beatles played (the Cavern Club). Here is a list: 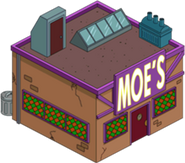 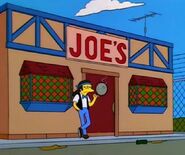 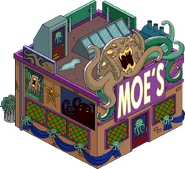 Retrieved from "https://simpsons.fandom.com/wiki/Moe%27s_Tavern?oldid=812280"
Community content is available under CC-BY-SA unless otherwise noted.