Arnie Pye flies by and falls out of his helicopter.

The Simpsons are butterflies that come out of their cocoons and nearly get smashed by Gerald (the baby with a unibrow whom Maggie hates). Maggie prevents Gerald from smashing the butterfly Simpsons, and all four of them fly off into the sunset.

"Moonshine River" is the first episode of Season 24. The episode was also dedicated to Andy Williams, who died from bladder cancer five days before the episode aired.

After Bart realizes that his relationships didn't last long, he plans to visit all of his ex-girlfriends for a second chance. After being rejected by the old flames he goes to see Mary Spuckler, only to learn that she moved to the east coast. Finding Mary as his last chance at love, the family travels to New York City.

During a dance following a disastrous joint celebration of the Springfield Grand Prix (a car-race tournament) and the final stage of the Tour de Springfield (a cyclist competition), Bart makes fun of Lisa and Milhouse while they are dancing. Lisa opposes that she is with someone who likes her, to which Bart replies of how he has had relationships before. However, Lisa mentions that he never had a relationship that lasted long. Seeing that Lisa is right, he chooses to visit his girlfriends and see if they'll give him another chance.

Bart and Milhouse go to visit Bart's ex's but ends up being rejected by several of Bart's previous girlfriends, including:

Finally they go to see Mary Spuckler, Cletus Spuckler's daughter from Apocalypse Cow. Milhouse notices how good looking Mary is and Bart points out she was the only one of the children to be breast fed. At the Spuckler house, Bart asks Cletus if she is here. Cletus and Brandine inform Bart and Milhouse that Mary ran away after being engaged. Dubya Spuckler then informs them that Mary is at New York City. Bart then asks the family if they can go to New York, and after some thinking, they agree to go. Bart and Homer search for Mary, and just when he thinks that he will never find Mary, he comes across her and sees that her appearance changed. As Bart and Mary go around the city and chat, Mary sings a song for Bart while playing the guitar. She then admits her love for Bart. However, before the two get a chance to kiss, Cletus suddenly arrives, saying he is here to bring Mary back especially because her mother misses her.

As Cletus and the family are occupied, Mary reveals to Bart that she is leaving them again. After kissing Bart, Mary says goodbye and leaves on a train. When Cletus sees she is gone, he orders Bart to reveal what happened. Bart refuses, as he says that Mary is proof that a girl will like him. Cletus then realizes that it is time to let Mary go. The family and Cletus go back to Springfield, and during the ride, Cletus gives Bart a picture of Mary so he can remember her.

Simultaneous to Bart and Homer's search for Mary, Lisa and Marge try to find some entertainment. They eventually go to a show of Romeo and Juliet, only to realize that the cast has quit due to a disagreement. Marge and Lisa choose to stage their own play of Romeo and Juliet, only for the pair to get arrested. During the train ride back to Springfield, Lisa becomes outraged to see bad reviews of her show in the paper but calms down to see that the critics like her. 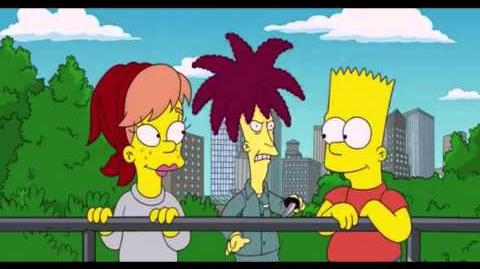