"You Only Move Twice"

Mr. James Bont is a secret agent and an enemy of evil genius and CEO of Globex Corporation, Hank Scorpio. He was captured in his attempt to stop Scorpio but managed to escape. However, he was tackled by an oblivious Homer Simpson, who was unaware of Scorpio's activities. Bont was immediately executed by Globex guards. Scorpio was clearly pleased with Homer's performance, but Homer believes that Mr. Bont was simply a loafer on the job, as evidenced by Homer's later boasting to his family that he nabbed a loafer. He was sent by the UN to foil Hank's plans but was killed by four Globex soldiers. His allies are the United Nations and the American G.I. and Rangers that storm the Globex building later on in the episode and nearly every soldier is killed by Hank's staff. 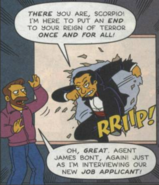 James in the comics