Louis 'Mr. Teeny' Toot, also known as Joseph Teeny, and known to his mother as Louise,[1] is Krusty the Clown’s chain-smoking trained chimp.

Like Krusty, he is a heavy smoker and often seems depressed off-stage. He was once seen playing Wii Sports with Krusty. He is sometimes seen as Krusty’s driver, accountant, and butler. He's a classic act in Krusty´s show when he does "monkey business". Mr. Teeny also rescues Krusty from a bomb carried by a brainwashed Bart. Krusty refers to Mr. Teeny as a monkey, although his lack of a tail indicates that he is a chimpanzee. This is because Krusty has poor knowledge of animals, even referring to Lemurs as monkeys.

Mr. Teeny is originally from Brazil. His uncle was once the head primate at the Bureau of Tourism in Brazil and his mother's name is Toot-Toot, and she calls him Louis when they're reunited.

Also, it's revealed there have been other apes that went by the name "Mr. Teeny." Krusty apparently considers the third "Mr. Teeny" to be the best, and claims the current one and the very first one "couldn't hold a candle" to Mr. Teeny III--however, Krusty seemed to like Mr. Teeny II, at least in that Krusty claims that he helped him to score with women.[2] Krusty once called the current Mr. Teeny in his possession is the seventh one to go by "Mr. Teeny."[3]

Teeny was a writer for the “Good Guy Awards” and quit after being insulted on-stage by Krusty.

He is an immigrant from Brazil and was deported when Krusty went broke, but has since returned. In "Coming to Homerica" while playing chess with Mr. Teeny, Krusty said that "you fell for my trap just like in Africa" hinting he was born in (or at least lived in) Africa. Since there has been more than one Mr. Teeny some of them may have come from Africa while others came from South America. As he appears to be a simian, lacking a tail, his distant ancestors would have been African, even is his parents aren't, meaning his parents must be an invasive species, as non-human simians aren't indigenous to South America.

He wears a pink fez and bow tie but has also been seen in a tuxedo and gold encrusted thong.

Krusty has implied that if he can't find a human willing to donate a lung when he gets cancer, he's planning on harvesting one from Mr. Teeny (it may not be a very good lung since Mr. Teeny is a chain smoker).

He is voiced by Dan Castellaneta. Captions are sometimes added when he speaks. 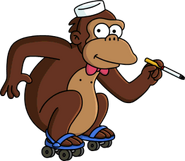 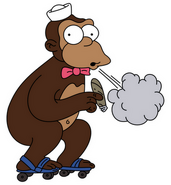 Maggie and Mr.Teeny in the Simpsons Movie