The Multi-eyed squirrel is a pink, mutated, multi-eyed squirrel with 38 eyes positioned 360 degrees around his head (counting the two on his sides which pop out later than the rest) and tannish-white chipmunk-like markings on his head and back and sharp white pointy fangs.

The squirrel was mutated in Lake Springfield after Homer dumped an overflowing silo filled with pig (and some of his own) excrement into the lake, causing it to become highly toxic. When chased into the lake by a raccoon, it emerges as a mutant. While on a hike together nearby, Bart and Flanders encounter the mutant before it is captured by the EPA and presented to President Schwarzenegger. He fulfilled part of the prophecy describing "One Thousand Eyes," even though it was only 38 eyes.

The mutant squirrel is seen in the Simpsons Movie figure set "What You Lookin' At?", depicting the scene where he is found by Bart and Ned Flanders during a hike. The squirrel was originally concealed in early pictures of the set, presumably to avoid any leaked plot information, but pictures of the full, unblocked set soon leaked onto the internet before the figure's release.

He also briefly appears in the altered Opening Sequence of the first episode of the Simpsons 19th season, "He Loves to Fly and He D'ohs", where he is seen jumping on Bart and being hit by a wrecking ball.

It eventually reappeared as a mounted trophy in Chuck Dukewagon's All American Chow Lounge. 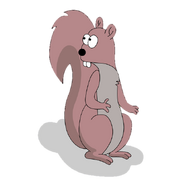 The squirrel prior to its mutation

Retrieved from "https://simpsons.fandom.com/wiki/Multi-eyed_squirrel?oldid=892976"
Community content is available under CC-BY-SA unless otherwise noted.