The MyPad is a tablet made by Mapple. MyPad is a parody of the Apple iPad.

Homer played The Happy Little Elves Game on his MyPad.[1] Mr. Burns was also seen using a MyPad in his office.[2] There is a Game Called Angry Burns on the MyPad. There is also a quest 'play on MyPad' in The Simpsons: Tapped Out game on IOS & Android 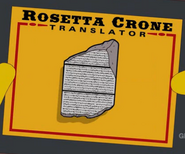 IRunes
Add a photo to this gallery

The MyPad is a parody of Apple's iPad.

Retrieved from "https://simpsons.fandom.com/wiki/MyPad?oldid=860892"
Community content is available under CC-BY-SA unless otherwise noted.