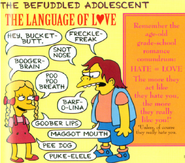 in Bart Simpson's Guide to Life

Nelson about to punch Milhouse

Nelson as a hobo

Nelson about to throw a football

Nelson as a member of Party Posse

Nelson on picture day with Edna

One of Nelson's "Ha Ha!" moments

Nelson and his Christmas tree

"Guess who likes you?"

Nelson with Jimbo and Kearney

Nelson in show and tell 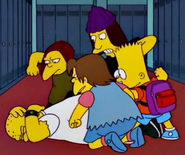 Nelson pushing Milhouse out of the way while go-karting

Nelson in a Western outfit

Nelson mournfully sings a song about his father.

Nelson angry about spaghetti all over his shirt

Nelson laughing at Martin with Jimbo, Kearney, and Dolph

Nelson and his mother reuniting with his father once again

Nelson with Bart, Lisa, and Homer in Homer's car

Nelson goofing around with his classmates

Nelson tried to escape, but to no avail

Yet another "Ha Ha!" moment

Nelson with his Clash of Castles land

Nelson on child restraints while getting controlled by Homer

Nelson going for a ride with his dad

Nelson getting tranquilized by Stewie Griffin

Nelson getting tortured by Stewie

Nelson taunting Bart after being rescued from Stewie

Nelson in the mob in "The Serfsons"

SmellYa8R Nelson
Add a photo to this gallery
Retrieved from "https://simpsons.fandom.com/wiki/Nelson_Muntz/Gallery?oldid=907446"
Community content is available under CC-BY-SA unless otherwise noted.