Ice Cream of Margie (with the Light Blue Hair)

Tress MacNeille
Opal is the main talk show host for "The Opal Show".

On her show, Opal frequently mentions a boyfriend named "Straightman". Asking about him causes her to do a massive prize giveaway as a diversionary tactic, one example being German cuckoo clocks.

Opal is voiced by Tress MacNeille, and first appeared in Ice Cream of Margie (with the Light Blue Hair), where she convinces Marge that she has no meaning in life.

Opal is a parody of Oprah Winfrey, as is her show.

The real Oprah Winfrey has also appeared on the Simpsons, where her animated form is shown on her talk show approaching the Simpson residence. A slovenly Homer answers shocked, and says he thought the interview was tomorrow. 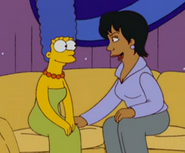