Simpsons Wiki
Register
Don't have an account?
Sign In
Advertisement
in: Male characters, Living Characters, Articles to be split,
and 7 more

This article is about the guest star. For the character, see Ozzie Smith (character).

"Homer at the Bat"

Himself
Ozzie Smith was shortstop for the San Diego Padres (1978–1981) and the St. Louis Cardinals (1982–1996). He appeared as himself in Homer at the Bat when he temporarily played for the Springfield Nuclear Power Plant softball team. He was depicted as a tourist and doesn't get to play in the big championship game due to an unfortunate incident.

Seeking to learn as much about Springfield's tourist attractions he arrives at a place called the Springfield Mystery Spot. He pays his admission, asking the attendant how much time it'll take to see it. The attendant jovially says that once Smith enters, he may never come out. Smith enters and immediately falls into a seemingly bottomless pit. He's shown a few mins later still falling and snapping a photo of Einstein's relativity equation that floats by. 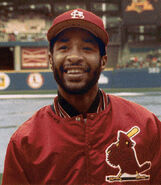