Patches is an orphan who lives in Springfield. His sister is Poor Violet. Poor Violet and Patches were abandoned by their mother when they were young. Patches had given their only $1 vitamin money to Bart, where he had carelessly used it[1].

When Ned and Homer open up Praiseland (a Bible themed amusement park) in memory of Maude. Soon many people suggest that they give the money the park's success is making to the orphanage. The money never is given to the orphanage because the park closes down. Patches and Poor Violet are both seen checking out of the orphanage[2].

He is nicknamed Patches because he is superb at sewing and loves to scratch the patches of nettle stings. 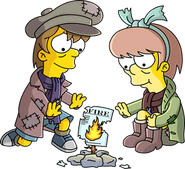 Retrieved from "https://simpsons.fandom.com/wiki/Patches?oldid=775181"
Community content is available under CC-BY-SA unless otherwise noted.