Philip J. Fry (born 14 August 1974) is a character from Futurama, voiced by Billy West. He is seen replacing Bart in a couch gag.[1] In the episode "Beware My Cheating Bart" he is seen on an asteroid with Turanga Leela. He and the entire planet express crew appeared in the crossover "Simpsorama".

He has orange hair and wears a red jacket with a white undershirt, blue jeans, and black sneakers.

Fry was in a relationship with a woman who suffered problems in the future called Michelle. They were together a few times, but they broke up a lot due to her cheating on him. He also has an on-again-off-again relationship with Turanga Leela. Fry also slept with his grandmother, making him his own father, and the father of his father. 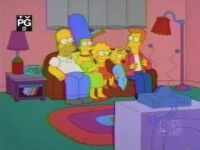 Retrieved from "https://simpsons.fandom.com/wiki/Philip_J._Fry?oldid=939375"
Community content is available under CC-BY-SA unless otherwise noted.