“Whatever injustice shows its ugly face, I will be there, for I am the Pie Man.”
―Pie Man's catchphrase

Pie Man is a superhero alter ago of Homer. He consists of Homer with an aluminum pie plate mask, quilt cape, blue bodysuit, boots, gloves, and external underpants.

Homer invented his superhero persona after the Rich Texan taunted Lisa at the county fair in the episode Simple Simpson.

Homer had been previously warned by the police that he'd go to jail if he committed another assault, so, thinking quickly, he assembled a disguise to avoid recognition.

He then hit the Rich Texan in the face with a pie to humiliate him. From that point on, "Pie Man" would go around smashing pies in wrongdoers' faces.

Eventually, Chief Wiggum tried to kill Pie Man to bring his antics to an end. When Wiggum shot him, however, Lisa discovered that Pie Man was actually Homer. Later, Mr. Burns also Mr. Smithers discovered his secret as well, and proceeded to blackmail Homer to smash pies on people Burns hated; otherwise Burns would reveal Pie Man's identity to the whole world.

During a visit of the Dalai Lama, Homer revealed his identity, but nobody believed him, except Marge and Bart. Bart later acted as his sidekick, as "Cupcake Kid".

Pie Man has proven a popular character with fans, and has appeared in Simpsons merchandise as well as the comic books. Pie Man appears in the opening sequence of "The Blue and the Gray", along with Cupcake Kid. 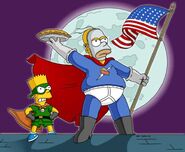