Princess Kashmir is first seen during Eugene Fisk's bachelor party. It's here that Homer gets his picture taken by Bart with his spy camera. The photo had far more effect on Homer than it did Ms. Tifton. She is moved by Homer's speech to all the men in the audience about not treating women as objects, yet she still remains an exotic dancer to this day. She has been known to work at "Florence of Arabia", "Girlesque", "Foxy Boxing", "Mud City", "Sapphire Lounge" and "La Maison Derriere". When she was a fan dancer, Homer payed more attention to her rather than to a conversation between him and Belle. She is seen with many men throughout the series, including Apu before his marriage to Manjula. Tifton is also a member of the Home Wreckers bowling team along with Mindy Simmons, Lurleen Lumpkin and Jacques. She is also somewhat of a celebrity in Springfield, appearing regularly on Springfield Squares. She also was one of the celebrities who sang with Sting the song "Sending Our Love Down the Well". 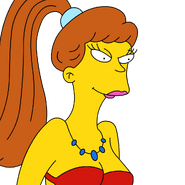 her 3rd official image
Add a photo to this gallery

Retrieved from "https://simpsons.fandom.com/wiki/Princess_Kashmir?oldid=613788"
Community content is available under CC-BY-SA unless otherwise noted.