"Once Upon a Time in Springfield"

Anne Hathaway
Penelope Owsley (aka Princess Penelope) was a new addition on The Krusty the Clown Show, originally put in to attract more female viewers. She was almost married to Krusty the Clown.

Penelope grew up in Mineola, New York, a village on Long Island.

Penelope was a new addition to the Krusty the Clown Show, as his producers found out that they were losing the female demographic. Krusty accepted the new addition, only to get tired of her girly antics very soon, quickly losing male viewers instead. When Krusty tried to confront Penelope however, she revealed to him how she joined mainly because of him, being his biggest fan since childhood. After this revelation, Krusty and Penelope start a relationship.

The Krusty the Clown Show episodes soon after feature them singing love songs to one another, with Krusty culminating in asking Penelope's hand in marriage, to which she agrees heartily. On their wedding day, Bart and Milhouse try to sabotage the ceremony by showing Penelope Krusty's array of ex-wives, including Holly Hippie and Eartha Kitt, both of whom despise him. Penelope still desires to be wed to Krusty, but Krusty believes that he is not worth Penelope's love and cancels the wedding.

Penelope then moves to France and sadly sings songs on her guitar at a local café. When walking on the Seine river bridge, she looks down at the water. A boat passes by, and she sees Krusty's reflection on the water. She turns around, expecting to see him, only to see nothing. Krusty is actually there though, he was just in the water. She flings herself in the water, and the two float down the river, staying afloat using Penelope's wooden guitar's case where they kiss.[2]

Penelope wears a beautiful pink dress (similar to that of Disney princesses). She has dark brown hair and wears long white gloves with fingers cut off and pink shoes with bows. She also wears pink lipstick, magenta stick earrings, a necklace with a star, and a blue tiara on her head.

According to The Simpsons: Tapped Out mobile game, Penelope left Krusty. In the game, she is again used to diversify Krusty's demographic, but this time for his theme park Krustyland.

Penelope on the phone 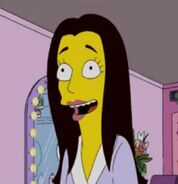 Penelope sings in Paris after canceling her weddimg

Penelope sadly thanks her public after finishing her song

A sad Penelope alone on a bridge

Penelope sees Krusty next to her in the water

Penelope turns around believing Krusty returned for her

...And happily jumps in the river after him

Penelope and Krusty reunite while floating on the river

Penelope and Krusty kiss
Add a photo to this gallery

Retrieved from "https://simpsons.fandom.com/wiki/Princess_Penelope?oldid=935545"
Community content is available under CC-BY-SA unless otherwise noted.