He is billed as being from the University of Heidelberg and he taunts the audience by kissing his muscles. He had a much-anticipated "wrestling match of the century" with Rasputin the Friendly Russian at the Springfield Center for the Performing Arts. Rasputin took control in the match early on, but lost after being hit over the head with a wrench by von Brawn, causing Bart Simpson and his friends/Homer and his friends, who were watching the wrestling match at the house and at Moe's Tavern, respectively, to promptly boo at the win and throw objects at the TV before an ad relating to Truckasaurus came up. The televised audience as well as the announcer were also furious over his win, as well, with the former also proceeding to throw food into the ring while booing.

In the Simpsons arcade game, he is the boss of the first stage, "Downtown Springfield." 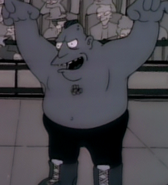