"Pulpit Friction" is the eighteenth episode of Season 24.

Edward Norton, who played, as Al Jean said, "The most lovable minister in the world. He is more popular than Reverend Lovejoy, if you can believe it, and Lovejoy is really upset and becomes a hot tub salesman. It comes down to a battle between the two of them...and there's a surprise ending."

When the couch breaks (from the family landing on it in the skydiving couch gag), the family plans to get a new one. Homer orders one from Brooklyn, New York. When the couch arrives, it is discovered that there are bedbugs and soon Springfield is overrun by them.

Reverend Lovejoy attempts to calm the residents, but then the Parson arrives and brings in Elijah Hooper, who is appointed reverend. The town soon takes a liking to Reverend Hooper and the cultural references that he makes in his sermons.

Marge is deinfesting her clothes when she finds that her wedding dress has been switched with one from Krusty's skits. When Marge finds Krusty, he explains that he doesn't have Marge's dress anymore. Lisa soon finds it in the hands of another couple who Marge gladly accepts to keep the dress.

While Homer and Hooper bond, Bart becomes jealous, and he soon sets off with Flanders to find Lovejoy. They find Tim working at a Jacuzzi store, and he doesn't want to go back to his old job as a reverend. Bart and Milhouse find dead insects and lead a herd of frogs into Springfield. The town looks to Hooper, but he is of no help. Tim soon arrives and saves the town by making the frogs fall asleep. The townspeople, including Homer, accept Tim back as the reverend as Willie uses a rake and puts the frogs in a bag, walking away before he meets Lunchlady Doris with a pot with boiling water labeled "Springfield Elementary School".

Before the episode finishes, a van associated with Oogle drives by the Simpsons' house, where Bart and Homer, who are no longer deacons, moon the members and laugh.

Robert David Sullivan of The A.V. Club gave the episode a B, saying "The two things that are still usually enjoyable in the show’s 24th season are musical numbers and stories about Springfield under siege." Rob Dawson of TV Equals said "Is “Pulpit Friction” the first time a couch gag has led directly into the plot of an episode on The Simpsons? I don’t have an encyclopedic knowledge of the series, but it certainly feels unique; And the opening segment, all stemming from that broken couch, is a lot of fun. It’s basically an extended montage of the bedbugs spreading across town." Teresa Lopez of TV Fanatic gave the episode three out of five stars, saying "Other than a rather useless subplot involving Marge's missing wedding dress, this week's installment was fairly enjoyable with some great The Simpsons quotes."

The episode received a 2.1 in the 18-49 demographic and was watched by a total of 4.54 million viewers. This made it the second most watched show on Fox's Animation Domination line up that night, beating American Dad!, The Cleveland Show and Bob's Burgers but losing to Family Guy with 4.89 million. 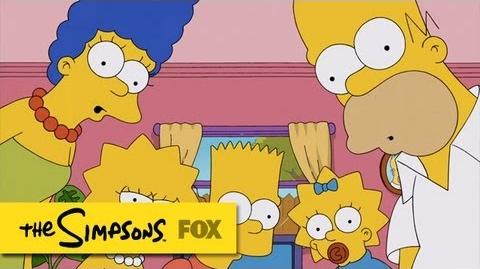 Retrieved from "https://simpsons.fandom.com/wiki/Pulpit_Friction?oldid=871758"
Community content is available under CC-BY-SA unless otherwise noted.