"The Twisted World of Marge Simpson"
Q-Bert Spuckler is one of Cletus Spuckler and Brandine Spuckler's children. In the comic book series, he was briefly Lisa's love interest.

Unlike most of his siblings, Q-Bert appears to be one of the few intelligent children in the Spuckler Family. In the comic book, he was shown to use proper English compared to the majority of his siblings.

Just like Lisa, he also cares about animals. He was also seen playing the banjo with his father, which indicates he has a talent for music.

Lisa first met Q-Bert in the bathroom, after Q-Bert snuck into the Simpsons' house to rescue the baby goats that got into the house.

The Spuckler and Simpson families were feuding with each other. He told Lisa he needed help taking care of the animals and Lisa agreed to help him, after she disguised herself as one of the Spuckler children.

Q-Bert and Lisa were caught kissing by Homer. The Spucklers were taken to court, where it was discovered they were related to the Simpson Family.

This ended the feud between the families. Q-Bert and Lisa decided to become friends with each other. It is not known if Q-Bert goes to school like some of his siblings do.

Q-Bert and Lisa meeting for the fist time. 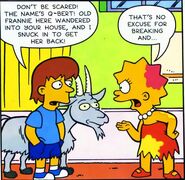 Q-Bert explaining why he broke into the Simpson house. 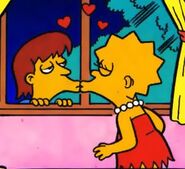 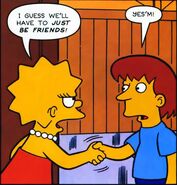 Q-Bert with his family.

Retrieved from "https://simpsons.fandom.com/wiki/Q-Bert_Spuckler?oldid=879561"
Community content is available under CC-BY-SA unless otherwise noted.