Richard is a gray haired student at Springfield Elementary School and one of Bart's friends. His best friend is Lewis.

Richard appears frequently in events involving the Springfield children. After school as shown in the second and third opening sequence, he often participates in the school band and plays catch with Milhouse and Lewis. In earlier seasons, he, along with Lewis, was commonly seen hanging out with Bart and Milhouse and was considered to be one of Bart's best friends and was often involved in his mischief. However, as Bart's time with Milhouse increased and as Nelson went from being an antagonist to a friend of Bart, Richard became far less often seen with Bart and was relegated to a background character who rarely speaks.

He usually wears a blue leather jacket. His hair usually stays gray, but for unknown reasons it will sometimes randomly be brown, black, blonde, and others.Also for some reason, his eyes are normally squinted.

Richard doesn't appear to be a very good student, for in the opening of the episode Bart Gets a "Z", Mrs. Krabappel gave him an F in his Math exam. He also was involved with Bart's mischievous deeds and was part of the fourth graders that were going to brawl with the fifth graders. He was also seen strangling Ralph in one episode, which showed his wild personality. [1]

He is seen dancing with Allison Taylor at the school prom.[2]

Richard and his mother.

Richard at the Simpson house.

Richard's appearance in the "Shows Too Short" story.

Richard sitting next to Jaffee.

Richard and his classmates are angry at Edna.

Richard and his classmates glare at Milhouse.

Richard with the other fourth graders about to fight the fifth graders.

Richard forced to dance with another boy.

Richard drawing with the other boys.

Richard's design on Homer's Night Out.

Richard angry at his friend, Bart. 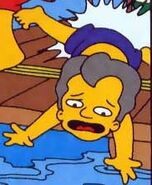 Richard laughing at Principal Skinner's lecture of Superintendent Chalmers crying like a girl.

Note: Many of his appearances are brief, background roles. Episodes in which he has an actual role are in bold.

Retrieved from "https://simpsons.fandom.com/wiki/Richard?oldid=675693"
Community content is available under CC-BY-SA unless otherwise noted.