Richard Dean Anderson (born January 23, 1950, in Minneapolis, Minnesota) is an American television actor. He played the eponymous hero in the television series MacGyver and, more recently, Jack O'Neill in Stargate SG-1. He appeared as himself in "Kiss Kiss Bang Bangalore".

MacGyver, starring Anderson, has been the favorite show of Patty and Selma for many years, even after it ended. ("Black Widower")

One day, Selma and Patty hold a MacGyver convention and are surprised when Anderson shows up. He explains that he was looking for the convention for his newer and more popular show, Stargate SG-1 and that he only did MacGyver for the pay. Patty and Selma are devastated, so they capture Anderson and tie him to a chair in their apartment so they can have a private convention. Later, they discover that Anderson escaped, but he returns and announces that he loved his MacGyver-esque escape and wants to try it again. They put him through a series of increasingly complex escapes until finally they get sick of doing it. They decide to scare Anderson away by showing him their slideshows, so he jumps out of a window and escapes. ("Kiss Kiss Bang Bangalore")

Anderson's character in Stargate SG-1, Jack O'Neill, is a fan of The Simpsons. Dan Castellaneta also appeared in an episode of the series. 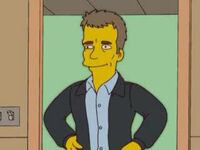 Retrieved from "https://simpsons.fandom.com/wiki/Richard_Dean_Anderson?oldid=829096"
Community content is available under CC-BY-SA unless otherwise noted.