Harry Shearer
Richard Nixon was a former President of the United States. After his tenure as President, he spent some time in Springfield.

Before Richard Nixon became President, he appeared in a Duff Beer commercial with John F. Kennedy during the Presidential debate of the 1960 election campaign saying that he liked "that particular beer" which Homer denies, saying "The man never drank a Duff in his life.[1]

According to a sign on the White House tour, Nixon once bowled back-to-back 300 games at the White House's bowling alley. Homer Simpson, however, didn't believe it.[2]

Mr. Burns said he let Nixon beat him at golf in 1974, apparently because he felt sorry for Nixon. Burns said that Nixon "just looked so forlorn", and was concerned about possibly going to jail.[5]

When Homer was put on trial for his soul by the Devil Flanders, Nixon was summoned to appear as a member of the Devil's hand-picked "Jury of the Damned." Nixon protested that he wasn't dead yet (and had just written an article for Redbook), but agreed to serve after the Devil reminded him that he owed the Devil a favor.[6]

Nixon was the 37th President of the U.S., serving from 1969 to 1974. He was also the 36th Vice President, serving in that office from 1953 to 1961. Nixon holds the historical distinctions of being the only President to resign from office and the only person to be elected twice to both the Presidency and Vice Presidency. In addition, Nixon was the Republican party candidate for President in the election of 1960 (which he lost to John F. Kennedy), which makes him the only person other than Franklin D. Roosevelt to appear on the ballot five times as a major party's candidate for either President or Vice President.

After his time as President, Nixon became a prolific author and an elder statesman in the area of foreign affairs, being consulted by both Republican and Democratic successors to the Presidency. He died of a stroke on April 22, 1994. 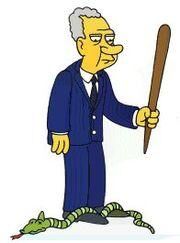 Nixon's and Burns's golf game probably would have taken place while Nixon was still in office, or shortly after he resigned. Nixon formally resigned from the Presidency on August 9, 1974, after announcing his resignation in a televised speech the evening of August 8. Before that, he was dealing with the Watergate scandal, which led to his resignation. He would certainly have been concerned about going to jail, and quite possibly would have looked forlorn enough to move Burns to let him win at golf. On September 8, Nixon received a full pardon from his successor Gerald Ford, which eliminated the possibility of Nixon going to jail. The same day he was pardoned, Nixon suffered a severe attack of phlebitis, from which he didn't fully recover—and which probably would have prevented him from playing golf—until early 1975. At any rate, for the remainder of 1974 after his pardon, Nixon wasn't in any condition to go golfing.

Nixon's visits to Springfield (for Whacking Day and to receive his honorary degree from Springfield A&M) would have to have taken place after his time as President. His hair is shown as entirely grey on those two occasions, and it wasn't all grey until several years after he was out of office.

Regarding the sign on the White House tour: In real life, Nixon was an avid bowler, and spent plenty of time in the White House's alley while he was President. He found that bowling sessions were easy to fit into his work schedule. However, it's unlikely that he ever had back-to-back 300 games.

Nixon was in fact still alive at the time of his appearances (as opposed to being mentioned) on The Simpsons, in "Homer Goes to College" and "Treehouse of Horror IV". He died just a few months after those two episodes first aired.

After Nixon's death, Matt Groening wrote a scathing article in the editorial column of Simpsons Comics 4 telling kids that Nixon was a crook and not to believe the sanitized eulogies on television that were ubiquitous at the time. Nevertheless, after Nixon's death he ceased to "appear" on The Simpsons and was no longer made the direct butt of jokes.

Retrieved from "https://simpsons.fandom.com/wiki/Richard_Nixon?oldid=939996"
Community content is available under CC-BY-SA unless otherwise noted.