Richard "Rich" Texan, also known as "The Rich Texan" and Senator Shady Bird Johnson[1], is a stereotypical rich, selfish, callous, but gregarious, business owner from Springfield. He wears a tan suit with a bolo tie and a white cowboy hat (which he wore on the day Kennedy was shot) and is in his 70s. He holds two guns at once.

The Rich Texan has a fortune of 290 million dollars, although at one time he was worth more than 1000000000 dollars (he was once accepted into Billionaire Camp[2]). He once owned a basketball team called the Austin Celtics, which he lost to Mr Burns in a card game. It is revealed that he often secretly mixed steroid with the cocaine consumed by the players to enhance their performance (a parody of the Boston Celtics) [3].

He is an active member of the Springfield Republican Party and speaks with a heavy Texas drawl. In Season 5's "$pringfield (Or, How I Learned to Stop Worrying and Love Legalized Gambling)" (the Rich Texan's debut), Homer addresses the Rich Texan as "Senator", although this was never mentioned again [4]. He once owned a logging company and once attempted to cut down Springfield's tallest Redwood tree, until his company was destroyed by the gigantic tree after it slid down a hill [5]. He also once owned all of Mr. Burns's possessions, when he won them in a bet [6]. One of Richard's fondest dreams is to build the world's first drive-through humidor [7]. He claims to also be a member of an unnamed group of oil tycoons who make foolish purchases, having bought a stained glass bathrobe and the world’s fattest racehorse.[8]

Richard always carried two revolvers, and he had a common habit of pulling them out and firing them into the air while yelling, "Yee-haw!" whenever he is happy or excited. He has been to jail at least once when one of his stray bullets hit a Texas Ranger and the police made him switch to blanks, but he noted that "They just don't feel the same" [9]. He once held Homer and Moe at gunpoint, while forcing them to walk along with him after being tricked by the two. He once went over the top and lost his mind after doing something generous for Ned [10]. In "A Serious Flanders: Part One", Johnson apparently owed millions of dollars. After begging for his life, he was shot dead by debt collectors after he was taken hostage and most of his body was dissolved except for his face.

Richard revealed that he suffers from pogonophobia (the fear of beards and mustaches), the excuse he gives Homer for parking in a handicap spot; he then promptly shoots at least one man dressed as Santa Claus [11]. He is also obsessive-compulsive and counts by stepping with his left leg 1-2-3-4 before firing his pistols [12].

Richard stated that he enjoys moonlight walks on the beach.[13]

He also drills for oil, although he claims that he doesn't do it for profit, but instead uses it for his private use for dancing (which involves him yelling "Yee-haw" under an oil tower spraying oil and dancing a jig), which he demonstrates to Bart and Lisa when they accuse him of fracking.

Richard Texan has a gay grandson [15] and a daughter named Paris Texan (who looks and acts like Paris Hilton, and whose name is a play on Paris, Texas) [16].

His grandfather served in the Confederate military, as he reacts to Bart mooning the flag "That's the flag my grandpappy rebelled against!"[17] 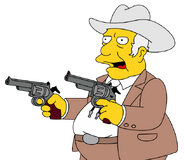 the Texan with Ned

The Texan in "The Serfsons" 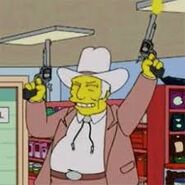 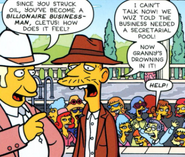