Roy is a college aged cool guy who stays at the Simpsons home temporarily. He resembles Poochie, a cartoon dog from The Itchy & Scratchy Show. After a while of living with the Simpsons, he leaves to move in with "two sexy ladies."

He is seen in a pixeled form doing a "pistol hand" signal to Bart, next to Chief Wiggum, in the opening sequence of "My Fare Lady".

When the Planet Express crew were transported to the Simpson's world with memory loss, Leela wandered off towards Springfield Elementary School, where Roy made a pass at her, she then stole his sunglasses and wore them to hide her single eye. 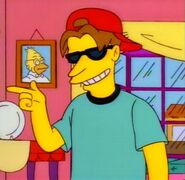 Add a photo to this gallery
Retrieved from "https://simpsons.fandom.com/wiki/Roy?oldid=797543"
Community content is available under CC-BY-SA unless otherwise noted.