Russell ''Russ'' Cargill is the main antagonist of The Simpsons Movie. He was the leader of the EPA and the Head of the Dome operation in The Simpsons Movie. At first, he seemed to have been acting out for the safety for the environment, but he gradually goes mad with power, and plans to destroy all of Springfield with a powerful time bomb. He is Arnold Schwarzenegger's right-hand man and one of his minions.

Russ mentions he went to Harvard Business School. Russ was the United States Environmental Protection Agency's Commander and described himself as a rich and successful man assigned to the least successful department of the government. He is first seen after a mutated squirrel is captured in Springfield, and presents it to President Schwarzenegger. He then proposes five different solutions to the mass pollution in Springfield and the result is a giant glass dome placed over the town. He appears to the townsfolk via a giant holographic screen and explains that because Springfield has become the most polluted town on the Earth, the government has decided to contain it. Later, the Simpsons escape the dome, and Russ orders extreme and somewhat strange measures to be taken in support of the containment of the town and towards the capture of the Simpsons. One of his henchmen responds by claiming, "Sir, I'm afraid you've gone mad with power!" to which Cargill responds, "Of course I have. Have you ever tried going mad without power? It's boring; no one listens to you."

Cargill later appears once again discussing with the president, about a solution to dispose of Springfield and takes advantage of Schwarzenegger's attitude towards reading plans, tricking him into choosing a particular plan, which is to destroy Springfield. Later, Russ appears at a train station in Seattle after learning that Marge, Bart, Lisa and Maggie are on a train headed there and sends his troops in to capture them and return them to the dome in order to kill them by blowing up Springfield. When the family are brought back after Homer's failed attempt to rescue them, Russ contacts the town once again via the screen and tells them that the EPA is going to destroy Springfield and everybody within the dome. A helicopter arrives, lifts a plug off the top of the dome and lowers a bomb on a rope in front of the now-destroyed City Hall. Russ impatiently oversees the countdown, and Cletus Spuckler distracts him so the townspeople can escape up the rope. Homer, who has climbed the outside of the dome, jumps through the hole and knocks everyone and the bomb off of the rope and accidentally brings forward the detonation timer, prompting Russ to disappear at this point. After Homer sees to it that the bomb detonates outside the dome and shatters it, a worn and battered Cargill wielding a shotgun ambushes Homer and Bart at Springfield Gorge and prepares to kill them in a final attack, but Bart Simpson pranked him about the "Treasure of Ima Weiner" But Russ isn’t amused and raises his shotgun at Homer and Bart before he is suddenly knocked out (and possibly killed) by a large rock shoved off from a nearby ledge by Maggie before he can fire a single shot. After the EPA’s plan to blow up Springfield failed, It is unknown if Schwarzenegger found out about Cargill's treachery, fired him as head of the organization and put him in federal prison or had simply died from the blow to his head.

He was rumored to appear in "Sky Police", but this has proven to be false.

Manipulation: He manipulated the President into allowing him permission to destroy the town.

Drugging: He arranged for his men to knock out and incarcerate Marge, Bart, Lisa and Maggie (presumably without medical degrees) through the use of anesthetics.

He was seen in Simpsons Comics The Death of Comic Book Guy Part 2. In it, he is giving President Arnold Schwarzenegger the news that people won't be insulted on the Internet anymore. Schwarzenegger then says that he thought that he had fired him and does so after he's finished telling him. Later, in the same comic, he is seen working for Mayor Quimby and telling him about the fight between the nerds and the geeks. He also appeared in The Walking Ned as a zombie alongside other deceased characters from the show which could prove he did die from the boulder.

In "Treehouse of Horror XXVI", appears in Bob's fiendbook feed in Wanted: Dead, Then Alive it is stated in his post that he is holding the ten year dome reunion.

He was seen in the original promo of "Treehouse of Horror XXVII" trying to kill the Simpson family, but was cut from actual episode.

He also appeared in The Simpsons: Tapped Out as a limited time premium character for purchase in the store during the Secret Agent 2017 event.

In The Simpsons Movie, Russ Cargill is voiced by Albert Brooks. His character has gone through many changes over the course of its development. An early version of the White House scene in the movie (available as a deleted scene in the Simpsons Movie DVD) shows an older and dorky model of Russ Cargill, who is arguably less menacing and antagonistic than the current incarnation. The older version is also the version given out in Burger King Kid's Meals promoting the movie.

It was also originally intended for him to be defeated by President Schwarzenegger with a tree branch but it was changed to Maggie with a boulder.

Russ Cargill was not the first villain intended for The Simpsons Movie. The original villain was to be Hank Scorpio from the Season 8 episode "You Only Move Twice" (also voiced by Albert Brooks), but was changed for some unknown reason.

Russ Cargill about to shoot at Homer

The prototype Russ Cargill from a deleted scene from the Simpsons Movie DVD. 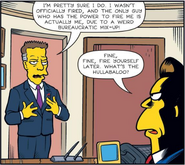 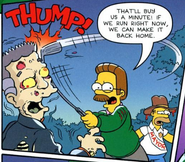 Russ Cargill as a Zombie in The Walking Ned